Alden's Rampage is the 33rd story mission in Infamous.

Alden's tearing across that bridge, heading for the Historic District. Stop him before he reaches the other side.
― John warns Cole of Alden's plan.

John White calls Cole warning him that Alden Tate is trying to escape the Warren District, and is fleeing across the bridge to the Historic District. Quickly making his way from his roof vantage point, Cole finds the previously sealed off bridge entrance in tatters. The bridge beyond was falling down due to Alden's telekinesis powers.

Climbing to the support beams above the crumbling road, Cole receives a call from Moya wanting to know why every time she tries to call him she gets disconnected. Fighting Alden's Dust Men, Cole sarcastically replies that he doesn't have time to run tech support for her, before ending the call.

I'll kill you! That whore, and your thief of a friend! All of you!
― Alden threatens Cole

Making his way along the bridges support beams, Cole faces heavy fog as well as numerous Dust Men. Fighting his way through Alden's troops, Cole reaches a giant gap in the bridge. Leaping across, he finds himself face to face with Alden, who quickly surrounds himself in junk, transforming himself into a supreme Golem. Cole then engages Alden in combat and, after a difficult fight, manages to destroy Alden's Golem form. Grabbing his broken adversary, Cole prepares to kill him. However, Alden tells Cole that he would like to join him to defeat Kessler. Using Cole's momentary hesitation, Alden breaks free of Cole's grasp and throws himself off of the side of the bridge.

Cole stares into the black waters below the bridge, and wonders if Alden, with his conduit abilities, could have survived such a fall. He then crosses the remainder of the bridge into the Historic District.

Cole fights his way along the bridge. 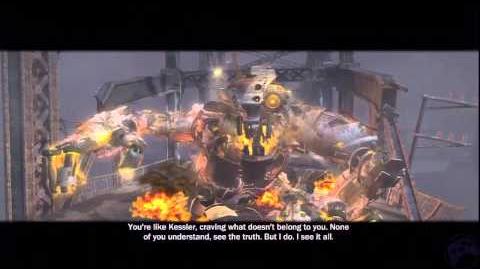 Story missions in Infamous
Retrieved from "https://infamous.fandom.com/wiki/Alden%27s_Rampage?oldid=109818"
Community content is available under CC-BY-SA unless otherwise noted.