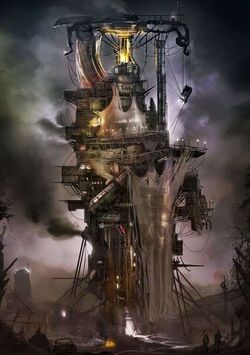 The reason he only took control of the very top, which comprises only about 10% of the tower, and not the rest of the structure may be because that he did not have the power to do so. Perhaps Alden planned to reactivate the Ray Sphere to gain the power necessary to control the entire tower. According to comments made by one city engineer during a mission the tower was built by engineers and citizens enslaved and used as forced labour by the Dust Men- in the words of an engineer rescued by Cole "All I know is that working on that damn thing is a death sentence, all they want to do is work you until you drop then pop you in the head".

Retrieved from "https://infamous.fandom.com/wiki/Alden%27s_tower?oldid=12982"
Community content is available under CC-BY-SA unless otherwise noted.