"Anything for Trish" is the 22nd main story mission in Infamous.

The Reapers attacked me on my last trip - they must think I’m working with the Dust Men or something. There’s no way I’ll make it back to the hospital on my own.
― Trish asks for help.

Cole meets Trish in the Neon District. She asks for his assistance transporting a bus of medical supplies to the Bayview Hospital in the Warren District. She had Roger Miller rig the bus with a metal mesh and generator, so Cole will have a constant supply of energy when he stands on top of it. After telling Cole that she will stop the bus if he needs to get off for any reason, she gets into the drivers seat, and Cole jumps aboard.

As soon as the bus is moving, it is attacked by a group of Reapers. Cole defends the bus as Trish drives through the Neon District, demolishing the Reaper troops lining the streets and rooftops. When they arrive at the Stone Canal Bridge, the Reapers and Dust Men are in the middle of a battle, and largely

ignore the bus as it makes its way across the drawbridge. After clearing the road of debris and abandoned cars, Cole receives a call from Moya, she informs him that she has a picture of the Dust Men's leader, and that she'll contact him once she has a name.

Making their way through the Warren, the bus soon comes under attack from the Dust Men, facing waves of RPG-wielding thugs and Kamikaze Bombers Cole continues defending the bus whilst defeating those who try to block the way.

Cole, I have the results from the photo analysis - it’s Alden Tate. The son of Richard Tate. You paying attention? I’ve got a lot of ground to cover, and this is important.
― Moya contacts Cole.

Once the bus reaches the hospital, Moya calls again, informing Cole she has learned the identity of the man in the picture: Alden Tate, the man who Cole is looking at right at that moment. In a moment, Cole is thrown from the bus as Alden uses his powers of telekinesis to lift the bus and launch it to the roof of the hospital. Before Cole can react, Alden is gone. With no time to lose, Cole fights through the remaining Dust Men and reach the bus before it falls, with Trish inside.
Reaching the roof, Cole finds Trish, asking her if she is all right. Her replies will relate to Cole's current Karma alignment:

Trish laments breaking up with Cole, saying she wants them to be together again, like how it used to be.

Trish scolds Cole, telling him if he really cared for her, he wouldn't be running around, hurting innocent people, destroying what little they have left.

Taking out a Reaper with Precision.

Alden on the hospital roof.

Cole watches as Alden throws the bus to the roof. 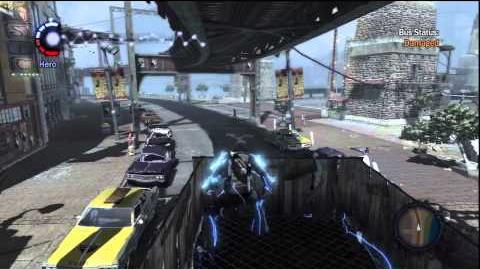