Assassin's Greed is an Evil Side Mission in Infamous 2.[1]

Cole meets with The Gangster who tells Cole that he has a reward for him, namely a large amount of Blast Shards. He says they are hidden on a nearby boat. However, when Cole arrives at the boat, he discovers he has been set up, there are no Blast Shards and he is attacked by a group of Vermaak 88 soldiers. Nix comes to Cole's aid, and between them they defeat the Vermaak 88. Afterwards, Nix captures the gangster, allowing Cole to execute him.[1]

As Cole reaches the boat a group of Vermaak 88 will assault him, fortunately Cole has Nix to aid him. The important thing here is to simply not fall into the water and reach land as quickly as possible, which is relatively easy. Cole must defeat every single Vermaak 88, and after doing so execute the Gangster who fooled him.[1] 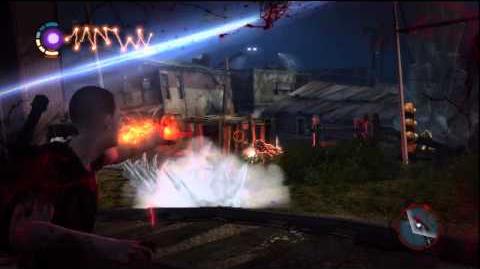 Side missions in Infamous 2
Retrieved from "https://infamous.fandom.com/wiki/Assassin%27s_Greed?oldid=109828"
Community content is available under CC-BY-SA unless otherwise noted.