Blast shards first appeared in the mission "The Escape." Over 350 shards were created and scattered all over Empire City during the Blast. Cole MacGrath could locate them all around the city using his Radar Pulse. Collecting a certain amount of shards would award Cole with additional battery cores.

Various factions of the three gangs, as well as the citizens of Empire City, collected blast shards for their own reasons. By helping citizens, Cole was occasionally awarded with shards. Sometimes, after having defeated an enemy, Cole would read their mind and discover a memory of a location with a package containing shards, which he could collect.

During the D.U.P. occupation of Seattle, Blast Shards were brought in by them as part of scanning machines made to detect Conduits. Delsin Rowe could retrieve them, and then absorb their energy in a similar way to the elements he collected, although unlike Cole, these did not immediately allow him to increase his elemental capacity, rather it allowed him to upgrade his abilities in lieu of Experience points.[2]

Shards were also found in the D.U.P. Mobile Command Centers. After destroying one, four blast shards were spread out in the area. They can also be found inside the conduit-detecting scanners at D.U.P. checkpoints and inside drones, seemingly part of the detection mechanisms themselves.[2]

The shards in Infamous: Second Son do not increase the amount of substance Delsin can store, but instead can be "spent" on a skill tree in the 'Options' menu, to improve any skill from Vent Dash to Video Torrent. However, the player can still spend the shards on "Drain Smoke", "Drain Neon", "Drain Video" or "Drain Concrete" for the same effect as the shards in Infamous or Infamous 2.[2]

Shards in Seattle bore serial codes and the D.U.P. initials, implying they were made by the D.U.P. and catalogued thoroughly.[2] 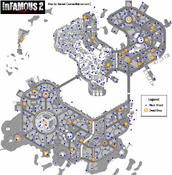