Brooke Augustine is the director of the Department of Unified Protection and a prime Conduit. She is the primary antagonist of Infamous: Second Son, as well as a supporting character in Infamous: First Light. She is an ex-military soldier whom had her powers activated while counterattacking a giant monster destroying cities. She takes an extremist stance on Conduits, despite being one herself, publicly labeling them as "Bioterrorists" whom are capable of catastrophic chaos.

Not much is known of Brooke's early life. She is believed to be unmarried and at some point joined the military. Prior to having her powers activated, she had no idea that she was a Conduit.

At some point Brooke was deployed to battle The Beast where her own dormant powers were unlocked. She found a young girl named Celia who was also a Conduit and with her wandered the lawless city, which was beset by mobs of angry Conduit hating people killing any Conduits they could find. Augustine and Celia managed to survive long enough for the military gain control hoping they would help.

However upon finding them the military believed them to be a threat. Augustine was drawn between her dual loyalties as a Conduit and a soldier. In the end she used her powers to encase Celia in stone, convincing the military and government of her loyalty and saving the girl's life.

After what had happened Augustine decided Conduits would be safest if they were put away somewhere from people who hate them and the military who would most likely kill them as a threat, even if it meant taking their freedom. To this end she created the "Department of Unified Protection", officially aimed at protecting normal people from Conduits, hiding her true goal of protecting Conduits from them.

Within the first year of the department the DUP captured over three hundred Conduits imprisoning them in Curdun Cay.

Loss of funding and Desperate Measures

Seven years after the DUP's conception it began to lose its support and funding. The DUP was the victim of its own success. With so many Conduits captured and the remaining ones in hiding the government no longer considered them a large enough threat to justify the DUP's continued existence. Unwilling to let the DUP be shutdown Augustine planned to stage another Conduit incident, which the DUP would stop, reaffirming them as a threat and the DUP's importance.

To this end she singled out three Conduits, Eugene Sims, Abigail Walker, and Hank Daughtry. The first two she trained to hone their powers, increased the threat that they would pose, the third a lifelong convict she ensured would be in the perfect opportunity to break out and release the others. Augustine then placed all three on a prison transport where they escaped as she had planned. Despite the plan being a secret, she suspected that Hank was on to her.

Augustine and her troops quickly respond to the escape, unexpectedly recapturing Hank who had been slowed down by Delsin Rowe, encasing him in concrete before conversing with Delsin. She is immediately suspicious of whether or not Hank told Delsin her plan. She is furthered convinced that he is hiding something when he identifies her and Hank as Conduits rather than Bioterrorists. She begins to brutally interrogate him jabbing concrete daggers into his legs, then doing the same to Betty.

Not believing Delsin's story about "catching the conduit bug" she renders him unconscious, brutally interrogates the tribe by stabbing them full of bits of concrete, before leaving the tribe behind to die.

Once her forces established full control of the city she used her powers to destroy or blockade every bridge or road out of the city, preventing the prisoner's escape. With the city news under her control she began to manipulate the perception of the escaped prisoner's actions, making them look like monsters and the DUP heroes. After Delsin made his way into the city Augustine made an effort to watch his every action. She was surprised by his ability to augment his powers by absorbing the energy from the blast shards powering DUP equipment, becoming further frustrated by her own inability to do the same when she tried. She was further shocked by Delsin's ability to absorb other Conduit's powers gaining Abigail's power to control Neon.

Augustine confronted Delsin when he attempted to cross the destroyed bridge to the Lantern District, wishing to see his newly gained Neon powers she pitting him against an extremely powerful DUP agent. Delsin attempted to convince her to let him have her powers so he could save his people from what she had done to them, Augustine refused and encased him in concrete. Before she could do anything else Delsin was rescued by Eugene, sending an Angel which carried him off to the Lantern district.

Unable to capture Delsin, Augustine cuts a deal with Hank, offering him his freedom in exchange for Hank leading Delsin into a trap, holding his daughter hostage as leverage. She captures Eugene and Abigail, using them as bait to help draw Delsin in, capturing him after Hank lures him into her trap. She is momentarily thwarted by Delsin's brother Reggie, who attacks with an RPG, freeing him. She retaliates knocking the two off the top of the complex, causing Reggie's death when he sacrifices himself to stop weighing Delsin down, plummeting to his death.

Augustine is attacked by the enraged Delsin who destroys her stone barriers and beats her while screaming at her for her numerous actions. Near defeat, Augustine resorts to destroying the complex causing it to collapse in the bay. Surviving, she retreats to her HQ in the Seattle News Tower, and begins calling for the people of Seattle to help drive Delsin from the city.

Delsin, with the help of Eugene and Abigail assaulting her HQ, he confronts her at the top of the tower. Their resulting conversation changes depending on Delsin's karmic alignment. Delsin either confronts her with the knowledge that she staged the escape and has been using Eugene and Abigail to make the DUP look good (Good karma), or she will reveal it to him (Evil karma). She reveals her true goal of using the DUP to keep Conduits safe by imprisoning them in Curdun Cay where they won't be killed by people who hate them and the military. She will either tell Delsin to use the trust the people have in him to convince them to support the DUP if good, or that his actions have more than assured her plan's success if he's evil.

Delsin battles Augustine again, defeating her and absorbing her Concrete powers, gaining her memories and learning her motivations for her beliefs. She states that she made the only possible choice asking him what he would have done. She also says that even though they now have the same powers she has had much more experience with them. Their battle resumes, Augustine using her powers to encase herself in a large stone construct. Delsin, however, is able to absorb more blast shards thanks to the help of Eugene, gaining enough power to defeat her, destroying her construct and encasing her in concrete.

Good Ending/Canon: On the good path, her actions are exposed and she is arrested, leading to the end of the DUP. Delsin, Abigail and Eugene become heroes to the public, convincing the people that Conduits and normal people can coexist in peace, releasing all Conduits that were caught by the DUP.

Evil Ending/Non-Canon: After being encased in concrete, Delsin drags her to the roof and throws her off at a very long drop, shattering the concrete and killing her, avenging Reggie's death.

Like other Conduits, Augustine displays immense superhuman physicality. In terms of strength, she is able to easily overpower Delsin, bending his arm to the point of causing him great pain. She is also fast enough to dodge and block beams of light from Delsin’s Neon powers, as well as dodge an RPG rocket from behind after it was fired. She also displayed incredible durability, as she could take numerous hits from Delsin’s most powerful attacks, as well as several Karma Bombs, and keep on fighting. She was also able to survive the destruction of her concrete island fortress, and was is well enough condition to make her way back to shore. In First Light, she showed no injury from Fetch’s extremely powerful blast that destroyed Curdun Cay’s walls, despite being in point-blank proximity.

Augustine displays a form of terrakinesis, the ability to control the earth, most evidently in the form of concrete. One of the many manifestations of this ability are her concrete lances, shards of rock that she can embed into the bodies of her victims, usually for torture purposes. Once they have pierced the skin, they fuse to the skeleton of the victim. As such, they are impossible to remove by normal, surgical means.

Augustine can also encase people in concrete, effectively entombing them, although in at least one case, this did not prove fatal. Her power over concrete also allows her to levitate rocks of various sizes, making them useful as a mode of transportation. As well as this, she can have the rocks circle around herself at high speeds, creating a shield of sorts that repels most attacks. However, should this not suffice, Augustine can always dive underneath the concrete, making her very difficult to hit.

A much larger application of her powers is the ability to create giant constructs made of concrete, which can shift according to her needs and protect her like armor. These constructs resemble golem-like creatures that can crush people underneath, fire multiple blasts of concrete rockets and rapidly reform into a manta ray-like formation to sweep across the field.

Through the use of Power Transfer Devices, the government was able to infuse hundreds of thousands of D.U.P. soldiers with Augustine’s powers, albeit in weakened forms of varying degrees.

Brooke Augustine is a fairly aged woman with red hair. She wears a dark jacket similar to a trench coat and has hearing devices in her ears. She can be considered a ruthless individual as she is willing to torture a large number of people in order to obtain information. Despite her initial appearance where it was thought she had hatred for all Conduits, she actually cares deeply for her fellow Conduits with all she has done with imprisoning them being her own way of 'protecting' Conduits from the outside world and hatred of all non-Conduits. In order to achieve this she is also willing to use her powers on others in order to accomplish her own ends including using concrete shards for torture purposes as effective media coverage with terms such as 'BioTerrorist'. She often says "I'm told this hurts" when she uses her concrete lance ability.

As shown in First Light, Brooke showed legitimate care for Abigail, while she was telling the events of how her brother died, this is the polar opposite to Eugene, or Hank, as she showed little care for their pain. 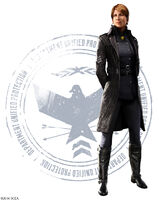 Augustine lying among The Beast's many victims. 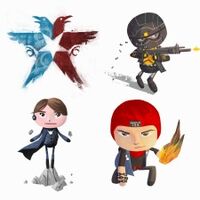 Retrieved from "https://infamous.fandom.com/wiki/Brooke_Augustine?oldid=105573"
Community content is available under CC-BY-SA unless otherwise noted.