"Burning Wells" is the 23rd story mission in Infamous 2.

It’s getting a little hard to breath since those ice freaks lit fire to the wells.
― Laroche, on the fires around Flood Town.

After Cole helped Laroche rid Flood Town of nearly all the swamp monsters, the Ice Gang took the opportunity and decided to overrun Flood Town. Laroche contacts Cole, informing him that the Ice Gang set fire to the wells. He tasks him with putting out the fires using the well cap nearby. After Cole does so (with Kinetic Pulse), Laroche informs Cole that they only have the one cap, and the next well is halfway across Flood Town.

After Cole makes his way to the next well, bringing the cap with him, he once again puts out the flames, despite efforts from the Ice Gang to stop him. He then brings the cap to the third well, however, he notices a fight going around between the swamp monsters and the Militia, with Bertrand present (in his normal form), though he shortly disappears. Cole, again, puts out the flames, and sets out to make his way to the last well, located at Laroche's hideout.

We Will Be Whole![edit | edit source]

After reaching the last well, bringing the cap with him, Cole is interrupted with the appearance of a Crusher. After a long fought battle, Cole comes out victorious, and puts out the flames of the last well. Laroche thanks Cole, praising him that the people of Flood Town own him more than he can say. He then tells him that he should go to Zeke, and that he got a "surprise" for him, which Cole immediately understands to be the Blast Core.

You must use Cole's Kinetic Pulse to lift the cap and cover up the wells. Getting the cap across town can be tricky, especially with all of the water. If the cap is in the water, Cole can jump on top of it and still lift it, then toss it. When throwing the cap, throw it as far as you can towards the target well, but at a good angle so that you don't toss too far past a well, or worse, toss it too far into the water.

When capping the third well, Cole will encounter some enemies in the rail yard over the wall. Take out the enemies, then head over to the last well to cap it. You will have your first encounter with a Crusher. Cole's grenades are a good choice against these guys. Cole's Ionic Freeze can also take a great deal of health from these guys, so long as they are not charging at you. 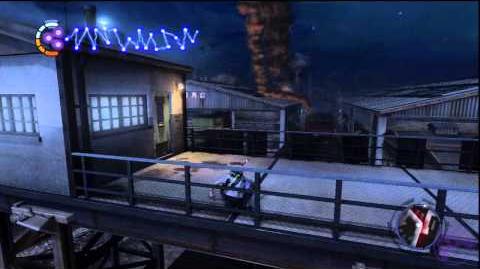 Story missions in Infamous 2
Retrieved from "https://infamous.fandom.com/wiki/Burning_Wells?oldid=109834"
Community content is available under CC-BY-SA unless otherwise noted.