In the game of Infamous (and in the beginning of Infamous 2), the main protagonist, Cole MacGrath, wears his signature bike courier jacket.

Cole wears his jacket whenever he makes deliveries when he's riding his bike (hence the term: "Bike Courier Jacket"). His jacket is black with yellow pads on the front, back, and arms, with small hints of dark yellow strips or lines on the arms and front of the jacket. The jacket also has a collar-like design into it. The yellow front of the jacket has a vase-like design to it, also on the chest area of the jacket shows a scroll with a Latin phrase ad astra per aspera writing on it, which means any of the following: "Through hardships to the stars", "A rough road leads to the stars" or "To the stars through difficulties".

Cole's jacket remains the same with some changes. First of all, Cole's jacket is a bit smoother than in Infamous. Second of all, the chest area, where the scroll is, is more noticeable but doesn't have any writing on it or hardly noticeable.

What happens to the jacket after he is fished out of the water is unknown as it disappears, and Cole no longer canonically wears it. It's possible it was badly damaged in his fight against the Beast, or due to the warmer climate in New Marais, he just decided not to wear it any longer.

Cole can wear the jacket after coming to New Marais, via DLC. However, since it is only unlockable via DLC, Cole wearing it after Empire City is considered non-canon. 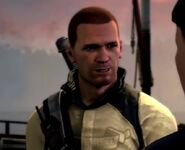 In Infamous: Second Son, after you've completed the last mission of Cole's Legacy, you'll receive Cole's original bike courier jacket. The design of the jacket is different compared to the first two games. First of all, the design of the jacket shows some tears in the front and the back of the jacket. Second, rather than the yellow pads being sewed up on top of the black jacket, the yellow and the black are sewn together imitating as a jacket pad-less. Third, instead of a cover hiding the zipper, the zipper is revealed. Fourth, the designs on the yellow seem to be removed, showing it as a regular jacket. Fifth, if you look close at the collar you will notice a metal button near the collar. Sixth, the collar on the jacket has a mandarin collar design. Finally, the way you see the jacket seems to be that the jacket is made out of leather the way all jackets are made of. 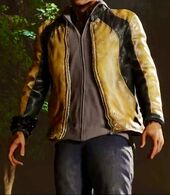 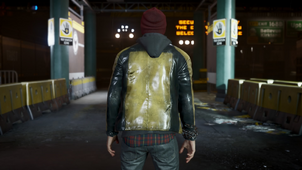 Cole's Jacket (back)
Add a photo to this gallery

Cole's jacket appears as an alternate attire for both Cole and Evil Cole. 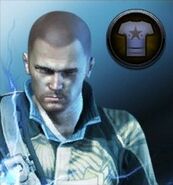 Retrieved from "https://infamous.fandom.com/wiki/Cole%27s_Jacket?oldid=105477"
Community content is available under CC-BY-SA unless otherwise noted.