Conduit, Not Human is the 15th story mission of Infamous 2.

receives a call from Zeke, who lets him know that Kuo has finally woken up and wants Cole to meet her in the St. Charles Cemetery. Once Cole arrives he's greeted by Kuo and is surprised by her new look. She tries touching Cole's face in an affectionate manner, but accidentally freezes his cheek. Cole then tells Kuo that he understands what she going through. She replies back stating that her transformation into a Conduit was slow and painful whereas Cole received his powers in an explosion and was over in a few seconds. Cole promises Kuo revenge on Bertrand for what he did to her, but first, Kuo has to get her powers under control. She barks back by saying she doesn't know how to.

Feeling bad for raising his voice, Cole asks Kuo to demonstrate what she can do. She explains that she can fly and heads to another part of the graveyard. Cole then follows her. Kuo tells him that according to Wolfe's notes, compatible conduits can combine powers. As it turns out, Cole unknowingly did this before with Nix. Him and Kuo decide to test the theory and it surprisingly works. After fooling around a bit, Kuo informs Cole that a Blast Core is hidden somewhere in this graveyard. The duo then begin seeking it out fighting Militia members along the way. During their search, Cole notices dead bodies piled up in an alcove. Kuo explains that the plague Cole encountered in Empire City wasn't stopped and has worked it's way down the coast all the way to New Marais.

Just before Cole checks a niche that might contain the third Blast Core, a Hive Lord appears to crash the party. Cole and Kuo work together to defeat and Cole finally finds the Blast Core he was looking for. Kuo then remarks that having powers isn't that bad after all. She then departs leaving Cole to his own devices. 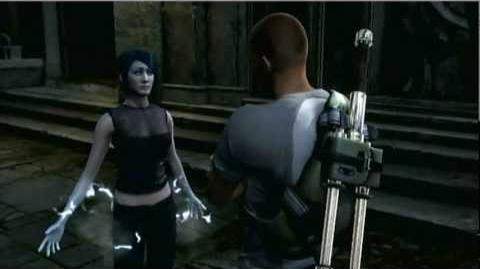 Story missions in Infamous 2
Retrieved from "https://infamous.fandom.com/wiki/Conduit,_Not_Human?oldid=109843"
Community content is available under CC-BY-SA unless otherwise noted.