‎Hard to believe that used to be a person.
― Lucy Kuo on the Corrupted in Flood Town.

After the Blast in New Marais, a newly activated Conduit Joseph Bertrand III was enraged with the abilities he had acquired, he began to hate Conduits, believing they were products of science and evil. Devising a plan to turn the world against Conduits, Bertrand began to convince the civilians of New Marais to visit him by making them believe the "devil" in them needed to be eradicated. Through his new found powers he mutated the civilians into Corrupted monsters. Thus, the Corrupted were created, ready to follow their master's commands after infesting the swamps.

Cole: "They're monsters, Nix."
Nix: "My babies are gonna come in real handy, you'll see."
―Cole MacGrath and Nix argue over the Corrupted.

The Corrupted were ordered by Bertrand to attack everyone at his rally to prove his point to the civilians that Conduits were a dangerous threat that needed to be dealt with. They then engaged the Militia and Cole MacGrath after scaring the civilians away, causing New Marais to become aware of their presence in the city.

Subsequently, the Corrupted reached areas in New Marais such as the St. Charles Cemetery. Bertrand was soon forced into his Behemoth form after losing control due to Cole's intervention. Bertrand, now in his immense Conduit form, rampaged across downtown New Marais, with the aid of other Corrupted variants. The Corrupted then fought over Flood Town against Vermaak 88.

Despite their activities, the Corrupted were all a part of their master's true plan; Bertrand intended to have the Corrupted, along with Vermaak 88, shipped across the world to wealthy warlords who planned to use the Forced Conduits on the battlefield. Soon nations would be fighting for control over the Conduits, kick-starting a new arms race in the process and making humanity hate Conduits for the chaos they cause and start a genocide. However, before Bertrand initiated his plan, he had the Corrupted and Vermaak loaded onto his cargo ships in the harbor, awaiting international shipment.

Hundreds of Corrupted variants were already loaded onto the cargo ships at the harbor of New Marais. However, through the efforts of Cole MacGrath, who was able to dismantle the cargo ship engines, the shipment of Conduits over the world had been prevented.

The Corrupted continued their activities, until Bertrand was confronted by Cole as he attempted to escape the city. Transforming again, Bertrand engaged Cole at the Gas Works, where he and many Corrupted variants went into a large brawl with the Rebels. After many Corrupted monsters were subdued, Bertrand was soon killed, leaving a large portion of the Corrupted leaderless. Soon after the arrival of John White in New Marais, the majority of Corrupted were killed, including all of Nix's "pets", causing her to seek vengeance.

One by one them monsters started to drop.
― Zeke Dunbar on the Corrupted's death.

The minority that remained after John White's attacks, continued to terrorize some areas of New Marais. Now abandoning the swamps, they constantly battled Vermaak 88. After Cole had activated the Ray Field Inhibitor however, all Corrupted along with Vermaak 88 and nearly everyone with the Conduit gene, died.

In an alternate timeline, Cole sided with The Beast. The two track down and destroyed the RFI before Cole creates a world of Conduits. With this, a small portion of the Corrupted still remained partly active in New Marais. Their eventual fate, however, is unknown. 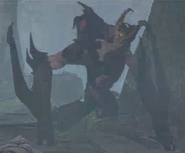