Dead drops were short, encrypted audio recordings that could be collected in Infamous and Infamous 2. They were found all over Empire City and New Marais. In Second Son, they were referred to as audio logs and were scattered across Seattle.

In Empire City, dead drops were attached to communication satellite dishes by the NSA agent John White as he investigated the terrorist organization known as the First Sons. While working for them, John was ordered to set up a large number of un-monitored satellite dishes throughout the city, therefore he attached miniature audio drives to them to pass information along to his handlers. Unfortunately, due to John's disappearance following the Empire City Blast, the dead drops were never picked up by the NSA. A total of 32 dead drops were scattered across Empire City. Once Cole MacGrath gained a decryption program for his all-purpose phone, he was able to search all around the city and find them all, hopefully learning something about his enemies along the way.

The Dead Drops provided a unique source for, among other things, the history of the First Sons, audio recordings of Kessler's experiments, the relationship between Kessler and Sasha, and last, but not least, the Ray Sphere. Through the last Dead Drop, "A message for John White", Cole learned that John was ordered to return to the NSA by Director Houston, but he plaintively refused, as he had yet to recover the Ray Sphere.

The recording never played any part in the development of the story, and Cole did not show any sign of retaining the information received by them. Some seem to have been just made, such as the recording detailing the death of the Voice of Survival. This may suggest that John had to make them on a timed basis, and thus, did not always had classified information.

For a full list of the messages in the first game, see Infamous transcript.

Dead Drops make a return in Infamous 2. Here instead of simply having to find satellite dishes Cole will have to find pigeons that have encrypted Thumb Drives tied to collars on their necks and knock them out with Blasts or Bolts. Unlike the first game you cannot locate them using your sonar, and messages may differ depending on karmic state imported from the original Infamous. They were created by Sebastian Wolfe, former First Sons scientist, spy, and Conduit expert originally to inform NSA agents Lucy Kuo and John White on the First Sons' and later Joseph Bertrand's activities. Like in Infamous, the drops serve the same function. They do not progress the story but they give valuable background info on the Bertrand, the First Sons, and various other factions and characters.

For a full list of the messages in the second game, see the transcript.

Shortly after arriving in Seattle, Delsin Rowe was contacted via cell phone by a man named Tanner Black who claims to be in the Department of Unified Protection. He tells Delsin that his actions have started whispers in Washington D.C. about the need of the D.U.P and Brooke Augustine, and claims he'd like to help take it down from the inside. He sends a tracking program to Delsin's phone to help him find several audio logs that were scattered across the city, so Delsin can hear his story. Delsin then unlocks a series of side missions where he uses his phone to detect the distance away he is from one, and when he finds it, it lowers the D.U.P control over a District by 5%.

For a full list of the messages in this game, see the transcript. 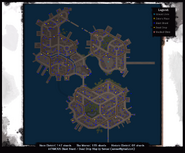 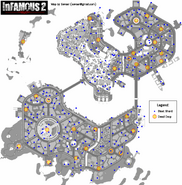 There are three trophies in Infamous pertaining to finding the dead drops.

There are two for Infamous 2.

There is only one for Infamous: Second Son.