The Face of Change

"Demons" is the 34th story mission in Infamous 2.

Cole, don't press me... If I turn back into that thing... There will be blood on both our hands..
― Bertrand

A Talk Between Demons[edit | edit source]

The mission begins with Bertrand walking out onto his helicopter platform to discover that there is nothing there, he then turns around and discovers that Cole had taken care of his flight. The two then have a brief conversation of Bertrand's full plan, to make an army of conduits so that the world learns to hate and despise the entire race of super beings. Bertrand, after feeling threatened by Cole bringing up his Amp, changes into his full form, the Behemoth, and goes on a rampage to attempt to kill Cole.

Cole gets a call from Zeke who tells him to jump on the back of his truck, Cole is then pursued by Bertrand in his Behemoth form, destroying everything in his path to get and destroy Cole. With the Behemoth close behind, Cole fights him off with everything he has to lure it into a trap while Nix and Kuo and several Rebels try and bring the monster down.

Once he arrives in the truck, the rebels lay a large trap underneath the Behemoth which Cole shoots and causes it to explode. The rebels then fight against the stunned Behemoth and an army of Corrupted, which it constantly generates out of its massive body. After receiving a large amount of damage, the Behemoth manages to get back up and resumes on its rampage.

Laroche then sends down a helicopter for Cole, who gets on and once again lures the Behemoth over to another trap. While he is on the copter, Zeke sends out several unprofessionally-made missiles toward Bertrand to slow him down, but the missiles unfortunately turn out to be duds. Cole manages to ignite the bombs by shooting them, and the Behemoth eventually steps back into the trap, and the battle resumes. Kuo and Nix manage to keep the Swamp Monsters busy while Cole shoots at the creature's weak spots.

Finally, Cole then manages to shoot down the Behemoth, and Bertrand falls and dies. Nix then walks over to the corpse of the Behemoth and spits on it. Nix is then comforted by Kuo, and shortly afterwards by Cole. 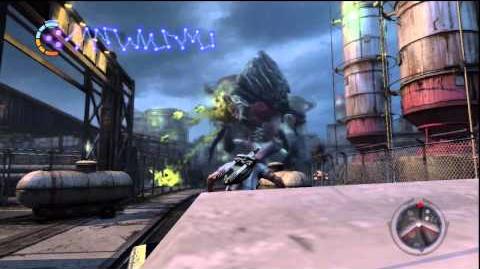 Story missions in Infamous 2
Retrieved from "https://infamous.fandom.com/wiki/Demons?oldid=106560"
Community content is available under CC-BY-SA unless otherwise noted.