Double Whammy is a side mission in Infamous 2.

Those ice freaks captured a bunch of Militia thugs. You should hit them now while they're all together.
― A citizen contacts Cole.

Cole makes his way to Flood Town and meets with one of the area's residents who informs him that a group of Ice soldiers are abducting several Militia members, and that he should deal with them all.


Making his way to the first group Cole finds a number of Vermaak troops leading their Militia captives toward the Gas Works, jumping in, Cole deals with the group quickly. Racing across the area he heads his way to the small dock near the ship yard, Cole locates the second group of captives and deals with them, removing more of his foes from the area.

Defeating the Ice soldiers.
Add a photo to this gallery 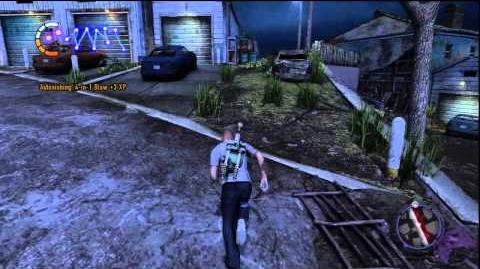 Side missions in Infamous 2
Retrieved from "https://infamous.fandom.com/wiki/Double_Whammy?oldid=109850"
Community content is available under CC-BY-SA unless otherwise noted.