Moya Jones: "A couple of days after the Blast, the homeless people living there banded together and seized control on the entire borough. They call themselves the Dust Men."
Cole MacGrath: "Guess that explains why they're all wearing trash bags."
―Moya Jones and Cole, about the Dust Men.

The Dust Men, also known as Trash Baggers or Transients were a large faction that consisted of former homeless people from the Warren District who rallied under Alden Tate soon after the quarantine was put into action in Empire City. Though before they were nothing but homeless people, after the Blast the faction collected scrap metals and had risen to power in a short period of time and took over the Warren.

Their headquarters was built on a park where they centered their operations and constructed a Tower in place. They continued to rule, until their downfall at the hands of the Prime Conduit, Cole MacGrath.

Before the Blast the Dust Men were only the homeless people who infested the Warren, Alden himself included. However, soon after the Blast, the Dust Men, like the Reapers, formed into a more orderly faction, and took what they needed for power by hostile means. Being homeless, the Dust Men made their trademark with the trash bags and scrap materialized weapons. Scavenging any scrap material, they built several bases throughout the Warren to keep control, with the unofficial Tent City as their main source of operations.

After the Blast, several Dust Men were able to track down John White, who had the Ray Sphere in possession, and steal it where they took it back to their leader, Alden.

That night, we could hear the screams from Tent City. They were drunk on power, proud of their victory over the cops... over me.
― Cole on the Dust Men.

After the Blast the Dust Men used several methods to gain higher control over the city and the other factions, as well as an attempt to escape Quarantine whereby they held civilians captive on private docks, hoping to be allowed exemption from the Quarantine with the presence of human hostages.

The transients constructed various bases throughout the Warren to keep control over the whole district, even converting an entire shipping container yard into a maze of narrow alleyways and ambush points. They designed sophisticated weapons and arnaments from salvaged scrap materials such as Scrap Crabs and Golem Conduits, which can pose a deadly threat to an inexperienced Cole. The Dust Men also attacked Cole on a much more personal level; at one stage Alden Tate levitating Trish Dailey to the top of the Warren Hospital roof with his powers while she was trapped inside a bus, and kidnapping Zeke Dunbar.

Immediately after Alden's arrest, the Dust Men went on a rampage through the city shooting down civilians in Terror Buses but Cole stopped them. Eventually they mounted an attack on Eagle Point Penitentiary, where Alden was held captive. Although Cole was relatively powerful at this stage, the Dust Men overwhelmed him and the police in sheer numbers. They eventually breached and freed Alden from his prison cell, mostly due to Zeke abandoning his post. Some time after this, Cole discovers that the Dust Men were in possession of the Ray Sphere, and that it resided at the top of Alden's Tower.

After destroying most of the Dust Men's operations and resources, Cole and Zeke attempted to obtain the Ray Sphere. Zeke went against Cole's orders and tried to activate it to no avail. Kessler, who arrived in a helicopter, claimed he knew why the Ray Sphere failed to work. Influenced by the words of Kessler, he went with him and escaped with the Ray Sphere. Losing the Ray Sphere, a powerful device of mass destruction, Alden and the other Dust Men abandoned Tent City and rampaged across the bridge to the Historic District, home of Kessler and the First Sons.

Soon after, John White tasked Cole with dealing with the raging Alden. Crossing the bridge that connected the Warren to the Historic District, Cole encountered heavy resistance from the Dust Men. As more of the bridge was torn apart by Alden and his Dust Men, Cole came face-to-face with Alden, though the latter had an advantage, using a massive psychokinetically-built body suit made of scrap metal. However, after a lengthy battle, Cole had damaged the construct enough for it to collapse under its own weight, Alden defeated.

Alden then explained his childhood, and how Kessler had denounced him of his birthright of heir to the First Sons. Cole was not swayed, and pinned Alden to the wall, ready to finish him off. Alden offered his assistance to defeat Kessler, the common enemy. As Cole considered this, Alden took advantage of the moment and jumped off the bridge. Cole later concluded that Alden, being a Conduit, would indeed survive the fall.

Later Alden was captured by Moya Jones and imprisoned. Shortly after Alden was imprisoned by DARPA, Moya had autopsy done on Alden. The autopsy began even when Alden was not fully sedated. The Dust Men's leader fate remained unknown after that.

After Alden's narrow escape from Cole and imprisonment, the Dust Men's morale was mostly destroyed, and were left completely leaderless. However, the Dust Men did continue to function without Alden, despite no longer planning and/or putting operations into action. However, it is likely that the remnants of the Dust Men were wiped out either by Cole and the ECPD or after The Beast destroyed Empire City during the Empire Event.

Submachine guns: The Sterling L2A3 used by the Dust Men appear to be older and rustier than those carried by the other groups. The rifles have a bayonet made of sharp scrap metal attached to the end of each one.

Shotguns: Functions like any other shotgun, though the Dust Men carry this weapon more frequently than the other groups.

Miniguns: Usually used by Dust Men guarding the sewers, the enemies carrying these weapons are more of a threat to Cole, due to the armor equipped to them.

Rocket-Propelled Grenade Launchers (RPGs): Much like their Reaper counterparts, the RPG is a powerful weapon. They are held by slightly bulkier Dust Men that have a higher resistance to damage than a regular enemy; they can often survive a head shock. They are also used by the Dust Men's Armored Conduits.

Grenades: Their grenades are not more powerful than other Grenades, but the Dust Men use them more often than the Reapers.

Grenade Launchers: The first Grenadier is encountered in the mission Alden Strikes. They can launch several Grenades in a rapid fashion.

Scrap Crabs: The Scrap crabs are small, crab-like figures made entirely of scrap metal and are formed together by telekinetic powers from Armored Conduits. The Scrap Crabs don't seem to have any awareness of a real life form, or the intelligence of a real robot. Their "mindset" is little more than a desire to attack anyone they see. They spawn in groups of three to five. These are the weakest enemy Cole will encounter in the game; a Shockwave, melee attack or Lightning Bolt is more than enough to take one out. Also, defeating the Conduit controlling them will cause them to self destruct. They are first encountered in the mission Zeke's Request when Cole follows the Echo, where he fights a group of them in an alley.

Turrets: A machine gun turret reinforced by a steel shield, forcing Cole to use a Precision head shock or Polarity Wall to get around the gunner and knock him out.

Boats: Fishing boats hijacked by the Dust men. In the mission Standard Protocol, the Dust Men have loaded a number of kidnapped citizens onto the boats, in hopes that the government will let them through the quarantine zone. Moya states that the Military guarding the coastline have a shoot on sight order for anything that tries to break the line.

Terror Bus: The Dust Men have taken over a number of city transportation buses and equipped heavy layers of scrap metal armor coatings and machine guns on all sides. Cole cannot destroy the terror buses by simply shooting lightning bolts at them. The only way for Cole to disable an armored bus is to get on top of it and overcharging its engine on the roof. The Terror Buses are encountered in the mission Terrorized Streets.

Turret Truck: An eight-wheeled flatbed truck with a turret on the back. They only have these parked in the blackout areas; they don't actually appear in the story. They can be destroyed for 25XP by targeting the cab: the Dust Man manning the gun will survive the destruction of the truck.

Scrap Metal Shields: Some Dust Men carry shields made of large chunks of scrap metal. However, they are still as easy to disarm as the other shields.

The type most often encountered in the Warren district, this rank of Dust Men carry Sterling L1 submachine gun on most occasions. However they carry a more varied selections of weapons than the other groups. As mentioned earlier, they wear quilted jackets, parts of old clothes, trash bags, scrap metals, combat boots and garbage bags over their heads acting as masks.

Most also wear capes made scavenged from garbage bags. Their armor is always damaged when a Dust Man is hit by any attacks. The Dust Men in general have stronger foot soldiers than the Reapers and can take more damaged due to more armor.

They come in 3 variants: The RPG Dust Men, the grenader Dust men and the less common, Minigun Dust Men. The RPG variant wear bulky brown cloth and a dirty white balaclava with a cloth cape and are more resistant to lightning damage than other dustmen. The minigun variant only appears in missions and looks like a standard dustman wearing a square hood with green cape and armor pieces.

They carry flare like bombs and have a set of explosives strapped to their chests. They are similar to the Kamikaze Reapers, but can handle more damage due to their armor. They make a truly incredible amount of noise even when they are not alerted, and this is the main means of locating them.

Also known as Scrap Crabs Conduits, these are heavily armored figures that carry RPGs and have the ability to spawn an infinite number of Scrap Crabs from a weird, cage-like "backpack" from their back. It is implied that they have limited telekinetic abilities, and that the "backpack" consists of the garbage they are using to make the crabs. These Conduits can withstand a lot of damage, such as several Head Shocks or Megawatt Hammer blasts. In the mission Zeke's Request Cole follows the Echo and at last it lead him to an Armored Conduit.

Also known as Armored Golems, are Conduits who encase themselves in a huge scrap armor. They can fire a machine gun-like arm, shooting rocks instead of bullets, scrap bombs and they can do a thunder drop-like attack(splash shockwave) if Cole is too close of the Golem. One needs to shoot out the leg or the arm, causing the Golem to fall and expose the Conduit. They also change colors depending how damaged it is, from yellow (normal), to orange (partly damaged) and red (critically damaged). 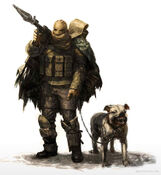