El Train is a side mission found in the Historic District in Infamous, in which Cole gets the trains of the area running again.

“We need your help to get the trains rolling again.”
— A citizen speaks with Cole.

Cole meets with a concerned citizen, who asks him to re-activate the trains across the Historic District, he warns Cole to take care as the First Sons have been patrolling the tracks. After making his way to the nearby station, Cole jumps atop the train and, thanks to his electrical powers, he quickly gets the train moving. Dispatching any First Sons that await him on the tracks, Cole only jumps down when the train stops due to a disengaged feeder box. Charging the box up, Cole quickly makes his way back to the train, leaping up to the front carriage.

As the train continues down the track, the First Sons increase their attacks, even sending several grenade launching Sentry Drones and a UAV to attack Cole. Once these flying menaces have been destroyed, Cole removes two cars blocking the rails and deals with a turret firing at him from the parking lot at the edge of Ground Zero, leaving the tracks clear for the trains to resume normal service.

Facing the UAV.
Add a photo to this gallery 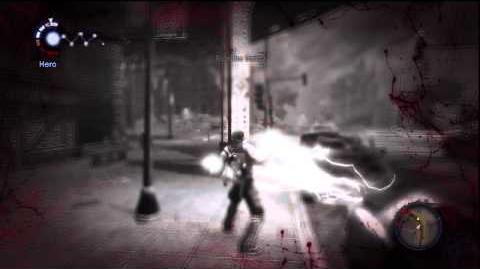 Side missions in Infamous
Retrieved from "https://infamous.fandom.com/wiki/El_Train?oldid=110762"
Community content is available under CC-BY-SA unless otherwise noted.