“The Militia just led a bunch of captives into the swamp. I suspect they use them for bait while hunting monsters. Let's go.”
— Kuo informing Cole.

Enduring Freedom is a Good karma side mission in Infamous 2.

First Kuo tells Cole that she has seen some Militia with a group of captives heading to the swamp. She thinks they'll use them to lure the monsters so that they can fight them. Kuo wants to save these people from the monsters and Militia, and thus asks Cole to go with her to save them.

In total there are four hostages to save; Cole fails if a hostage dies. First he has to clear out the whole area, before he can safely free the people, then he has to go on to the next location and repeat. After freeing all the sacrifice victims, Kuo says it's times like these that make having her powers bearable.

Cole and Kuo fighting the Militia. 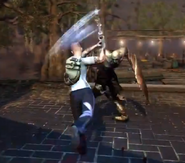 On way to a hostage. 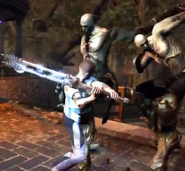 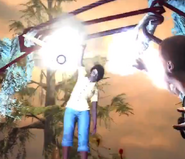 Saving a hostage.
Add a photo to this gallery

Side missions in Infamous 2
Retrieved from "https://infamous.fandom.com/wiki/Enduring_Freedom?oldid=105722"
Community content is available under CC-BY-SA unless otherwise noted.