Factions are organized groups inside the InFamous series that either group with Cole or try to hinder him.

The Reapers are the first antagonistic faction Cole faces, as they control the Neon District of Empire City. Originally, it was believed that the Reapers were druggies that decided to takeover the area after the blast. They are in fact citizens of the Neon being controlled by Black Tar a mind control agent that is produced by their leader, Sasha. If Cole goes down the evil path, he has the option to work with the faction under their imprisoned leader's influence. The most notable features is that they wear red (or very pale beige, if they are a Conduit) hooded jackets and will vomit Black Tar occasionally.[1]

The Dust Men are the second faction Cole faces. They control the Warren District of Empire City. With their District being the poorest, the gang is made up of the homeless led by Alden Tate. This is reflected on their outfits made up of scrap metal and trash bags, earning them the nickname trash baggers, as well as their guns are rust covered. Their colors include beige green and brown.[1]

The final faction that Cole faces. The First Sons are a cult group dedicated to discovering and unlocking the potential of humans. They can be traced back all the way to the 17th century. They control the Historic District of Empire City with their leader Kessler. Also unlike the other factions of Empire City they are fully equipped with the latest in weaponry and armor, making them the toughest of the three factions. The First Sons wear three piece suits and gas masks with attached tanks.[1]

The police force of Empire City, they are located in all three districts, with their most prominent member being Warden Harms. As Cole fends off most of the other factions, Cole is either able to gain help from the police force (Good karma), or they become another hostile faction to him (Evil Karma).[1]

The Militia is the first hostile faction that Cole encounters in inFamous 2, led by Joseph Bertrand III. Unlike the other factions, the Militia have no Conduits in their ranks. This is because they are a strict anti-conduit group and extremely violent enforcers. Their colors are orange and gray. Mini-gunners are the most noteworthy types.[2]

The Vermaak 88, or the so-called Forced Conduits, are a faction clad in metal armor, possessing cryogenic abilities. Little is known, but they were originally created by The Militia, and are the only faction to only feature Conduits. They're clad in metal armor along with some leather apparel, and use firearms similar to other factions. The Crushers are one of the more notable types of the faction.[2]

The Corrupted are mutated citizens of New Marais created by Bertrand. Their only purpose is to wreak havoc and mayhem all across New Marais. They have no normal human infantry, nor conduits. Larger forms include Devourers and Bertrand in his Behemoth form. They are hostile towards all factions as well as Cole.[2]

The Rebels are a group working against the Militia by protesting and trying to drive them out of town. They are one of the factions that don't consist of Conduits, and cooperate with Cole. Cole first stumbles into them when rescuing Rosco Laroche's niece Sara in The Sacrifice.[2] 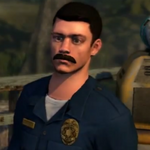 This group is the police force of New Marais that form the protection of the city's citizens. As Cole fends off most of the other factions, he is either able to receive help from the police force (Good karma), or gain another hostile faction (Evil karma). The NMPD is also a human faction, like the police department in Empire City, the Rebels and the Militia. Their leader is unknown and there are only two types of officers. They are usually seen patrolling around the streets at random locations.[2]

The Vampires are first introduced in the Festival of Blood Stand-Alone Downloadable game set during the events of inFamous 2. They're the only gang within the series that have both male and female members. They are all under the lead of Bloody Mary and it's Cole's mission to exterminate them. The Vampires are not part of the inFamous series' canon.[3]