“Help! They're executing people up on that rooftop.”
— The unnamed man speaking to Cole.

"Firing Squad" is a Good karma side mission in Infamous 2.

The mission starts as Cole talks to a panicked civilian, who tells him that there are people being executed on a nearby rooftop.

Cole immediately heads to the rooftop to save the hostages the Militia were shooting off. He defeats the Militia and, with that, saves all the prisoners.

This is one of the easiest side missions, as all you need to do is climb the very tall building and defeat the Militia. You can defeat them any way, but the simplest way you can do it is just by knocking them off the building using Cole's shockwave. Just make sure you don't accidentally hit any of the hostages!

Upon completion, Cole receives 100 XP and slightly reduces enemy activity in New Marais. Also, he becomes a bit more heroic. Completing this mission also locks out the evil side mission "King of the Hill."

Cole climbing up to the hostages 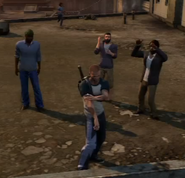 The saved hostages thanking Cole
Add a photo to this gallery

Side missions in Infamous 2
Retrieved from "https://infamous.fandom.com/wiki/Firing_Squad?oldid=105725"
Community content is available under CC-BY-SA unless otherwise noted.