Infamous Wiki
Register
Don't have an account?
Sign In
Advertisement
in: Powers in Infamous, Neutral Powers, Electrokinesis,
and 3 more
English

The Gigawatt Blades are a power used by Cole MacGrath in Infamous. Originally a pre-order exclusive, they became free downloadable content on December 9, 2009. Any new playthroughs of the game will have the Blades be the first unlockable power available to Cole.

At some point during the events of the Empire City Quarantine, Cole acquired these powers and used them in his fight to save the city. Later, Cole used them to fight the Conduits created by Moya Jones, and David Warner, injuring the latter with the Blades.

Later, during the invasion of Empire City, Cole utilized the Blades once again during his fight against Warner and the Military Conduits, this time manifesting it as a much larger version around only one arm. Cole lunged at David with the Blades, severing one of his tendrils. Cole used the Blades again in an attempt to decapitate David before he counter-attacked, sending him flying.

Cole forms blades of pure energy around each of his hands, which allow him to cause massive amounts of damage while melee attacking. The power also creates a slow-motion effect upon contact. This technique channels a high concentration of electricity to Cole's hands. The amount of energy is so great that it becomes visible. Once the technique is completed, Cole charges forward and thrusts the Blades into the target. This produces heavy amounts of damage that is usually fatal. This is a perfect power to use for gaining the "Up Close and Personal" stunt, as each blade slash counts as a melee attack.

Like all of Cole's powers, the color of the Gigawatt Blades is determined by Cole's karma; blue for good, red for evil, and reddish-black if the Ray Sphere is activated again. Cole's karma also determines the shape of the Blades. They are one-use weapons and must be re-triggered every time Cole uses them on an enemy and consumes three battery cores. They will also be deactivated with time if Cole does not use them on someone. The Blades are useful against Conduits (save for the First Sons Aura Conduits) and enemies with high health in general. If used right, they are able to sever arms off of the Golem Conduits. 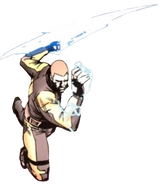