If you're a good man like they say, you'll stop the Militia and heal the wounded.
― The policeman briefing Cole on what to do.

After speaking with Zeke regarding those requesting help in New Marais Cole makes his way to the nearby pier. Meeting with a member of the New Marais Police Department Cole learns that the Militia are executing civilians they consider to be "Deviants" at a nearby mansion, before the police officer asks Cole to stop the Militia and heal the wounded.

Heading into the mansion's grounds Cole comes across three wounded civilians, healing them quickly Cole arrives at the mansion in time to see the Militia force a terrified woman jump off of its roof. Climbing up the side of the building Cole defeats the Militia members before they are able to execute the three remaining hostages. After defeating the execution team,

Cole receives a call from Kuo, who explains that the police at the pier, including the officer Cole has spoken to, were under attack. She asks Cole to back them up, but to capture on of the attackers for questioning. Racing back to the pier Cole assists the police in defeating and restraining the Militia members, at which point the police thank Cole and reassure him that they can handle it from there.

Helping the police.
Add a photo to this gallery 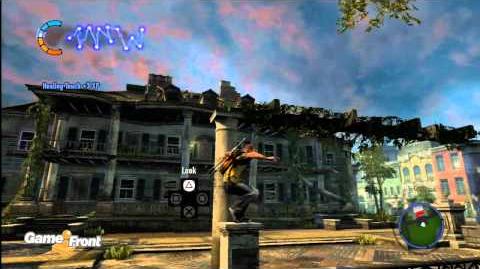