If what you're saying is true...
This article lacks sources. Please improve the article by adding necessary sources, then remove the {{Sourceneed}} tag. Any information marked with the {{Cite}} tag, may be objected or removed.
150px
Good Karma is the morally positive side of the Karmic system. In this state, Cole MacGrath is more calm and collected, and also shows concern for the civilians around him. In this state, Cole's electrical energy appears as a bluish white.

During combat, Cole must avoid hurting the civilians at all cost. That means Cole must be cautious when using attacks that have a wide area of effect, such as the Thunder Drop and Shock Grenade. It is wise to use more accurate attacks such as Precision and Lightning Bolt in order to attack enemies more accurately, and also without the consequence of hurting the civilians. Also, in order for Cole to gain more positive Karma after a fight, Cole must use Arc Restraint on the subdued enemies. While roaming around, Cole may encounter downed civilians along his way. Cole can use his Pulse Heal ability to heal the civilian to help him/her back up on his/her feet.

Present in inFamous are the Karmic Moments, where Cole is given two choices, one of which will gain him positive Karma.

In inFamous 2, several opportunities are presented to Cole all throughout New Marais, where he can decide whether to act or not.

Several Main Story Missions in inFamous 2 present players with a choice as to either follow the morally correct way of clearing it, or the incorrect one. After playing one of these choices, the other option will no longer be available for play, and will remain locked for the rest of the game.

“...but now I understand that this is my life. There’s no going back. That the 'gift' of these powers would be my burden 'till the day I die.”
— Cole, once he is revered as a hero.

During this mental state, Cole is shown to be more concerned about the civilians and their well-being. Deciding to take the fall over several crucial moments, like handling the police force during their attempt to escape Empire City, overtime, the civilians develop this sense of love and idolization of Cole, giving him high praise and comments. As Cole roams around Empire City, several civilians flock around him, taking pictures and giving their thanks. Also, other civilians that need help tend to go to him and ask for assistance. Some even call him a superhero when approaching him. Another situation in which the civilians show love for Cole is during his fights. When a nearby hostile attacks Cole, civilians and the police force assist him in taking them down. Zeke also mentions during one of his calls to Cole that his actions are giving hope to Empire City, giving an example that a civilian removed the bars that were used to bar themselves from the Reapers, implying that the civilian is no longer afraid of them due to Cole's actions.

Cole's powers also adjust to his mental state, examples are his powers are more accurate, giving Cole more focus in taking down his enemies without hurting the nearby crowd. Several upgrades to his powers give him ways to handle the enemy in non-lethal ways, such as the Shock Grenade (instead of killing his enemies, they are restrained to the ground) and also the Megawatt Hammer (Cole is able to redirect the fired blast by blasting a lightning bolt onto a selected target). Cole also has several touch-related actions that improve his Good Karma, such as the ability to restrain his enemies (Arc Restraint) and the ability to heal downed civilians (Pulse Heal).

Cole's appearance throughout the game will change, albeit minor. Cole maintains his black and yellow track suit, to a black and silver color scheme. Once he has reached the pinnacle of the positive Karmic state, Cole will appear cleaner, as though he is "the symbol of health & longevity".

“I'm not about to start torching families just to make my life easier.”
— Cole MacGrath, regarding his first Karmic decision in inFamous 2.

Similar to the first installment, the citizens of New Marais are very grateful for the efforts Cole MacGrath makes whenever he does a good deed. Like the civilians at Empire City, people at New Marais will often cheer Cole and give him praises and positive comments. Also, whenever Cole is successful in enacting a Good Karma Opportunity, he will sometimes be contacted by Lucy Kuo, who will give him praise and props for the deeds he's doing.

Cole's appearance and mentality change much more significantly then the first installment as his positive Karma increases. His standard black and yellow t-shirt is turned into a clean white and gray t-shirt, and also replacing his jeans with new track pants. His tattoos turn into star motifs, and the scar appears to be healing as his positive Karma increases. Also, his melee weapon (the Amp) appears to be cleaner when in this mental state. His skin appears more tanned, and his electricity turns into an icy blue.

In Infamous Second Son Delsin just like Cole is more calm and while he still maintains his care free attitude he also starts to show a more responsible side evening willing to sacrifice his own well being to protect Betty and his tribe he is also more cautious when dealing with enemies in situations involving civillians. While in Seattle as Delsin continues to help both conduits and humans alike the people begin to show a sort of respect and love towards Delsin to the point nearing the end the people realize that Augustine is the real villian and so hold off the guards while Delsin makes his way towards the tower.

Like in Infamous 2 Delsin's appearance change's according to his current Karma state. His hoodie will progressively turn from gray to white, turning completely white once he achieves True Hero rank. Additionally his default jacket, initially depicting a star/two headed eagle will slowly change to depict a blue/white eagle. 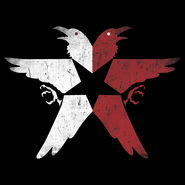 Protector, the star begins to tilt to the right to show that Delsin is leaning towards the light. 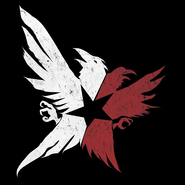 Guardian, the star becomes bigger on the white side than it is on the left, showing that the good in Delsin is stronger than the bad. 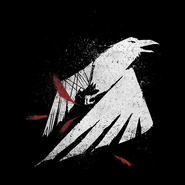 Champion, the star is replaced by a white eagle depicted smiting the red half, showing that the good in Delsin is actively fighting the bad. 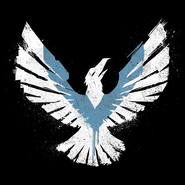 True Hero the symbol displays a eagle spreading his wings with no trace of the red half, showing that Delsin has become a True Hero.
Add a photo to this gallery

“I've never been more alone.”
— Cole, after the end of his trials in inFamous.

After dealing with Kessler, Cole reflects on what has transpired all throughout his time as a Conduit. He had stopped Kessler and the Ray Sphere was gone, thinking all of the madness would end and that things will go back to normal. Cole now realizes that this was now going to be his new life. Civilians show love and respect for Cole and what he's done to help rebuild the city, seeing him as a hero. Though now, he's lost all his contacts, with Moya still on the loose, and Zeke, who was still sorry for what he's done to Cole, staying clear of him for the time being. Cole remarks how he's never felt more alone.

“Who would have guessed that the Demon of Empire City, would become the Patron Saint of New Marais.”
— Zeke, on his best friend's success.

Deciding to use the Ray Field Inhibitor, Cole used the device after weakening John White and dealing with all other nuisances. After confiding with Kuo, Cole charged the device with everything he had, creating a large surge of energy that pierced through the atmosphere, killing him and all the other Conduits and individuals who had the Conduit gene on the planet. As the Corrupted and the Vermaak 88 fell due to the RFI, those confined at the Plague Ward suddenly felt better, being cured from the Ray Field Plague.

As civilians started to celebrate, Zeke arrived into town square carrying the body of Cole. Though Zeke thought his friend would go down as an unsung hero, the citizens of New Marais proved him wrong, as they helped carry Cole's body to St. Ignatius, where Cole's funeral was held. Civilians flooded the area to catch a glimpse of the "Demon of Empire City", now declared as the Patron Saint of New Marais. After Cole's funeral, Zeke took Cole's body and take it off to sea, stating that he wanted to say his goodbyes to him alone. The boat then makes it way into the unknown, when suddenly, a bolt of lightning in the shape of a question mark strikes Cole's coffin.

“I love you brother. And I'm sure gonna miss you!”
— Delsin Rowe saying good by to Reggie Rowe.

Deciding to expose Brooke Augustine's crimes to the world Delsin encases her in concrete and drags her to the authorities, commenting that her rage had turned into fear as her fortress, army and future had all been dismantled and the world now knew what she had done. He personally releases all the conduits at Curdun Cay, establishing once and for all that humans and Conduits can live together peacefully, a regular "second age".

That said there is a some unfinished business to attend to, Delsin returns to his village and finally removes Augustine's cement daggers from his people starting with Betty whom he also informs of his brother's death. Choosing to celebrate his brother's life instead of mourning his lost he paints a memorial to Reggie over his sheriff billboard, telling his brother that he misses him, and will always love him.

Retrieved from "https://infamous.fandom.com/wiki/Good_karma?oldid=72406"
Community content is available under CC-BY-SA unless otherwise noted.