Hearts and Minds Campaign is the good split mission of Transferring Power in Infamous 2, in which Cole MacGrath and Kuo work together to win the rebels support.

Arriving outside of Fort Philippe, Cole calls Kuo and asks if she has any leads on Bertrand's medicine stock pile. Kuo replies positively and a moment later crashes through the gates of the fort in a stolen ambulance. Telling Cole to jump on top, Kuo quickly begins driving through the streets of Ascension Parish leaving Cole to defend the ambulance from the Militia. After seemingly being in the clear and away from the Militia, Kuo and Cole begin to discuss Nix's plan, with Kuo seeming a little hard on herself on how people will accept her if she is a Conduit, and Cole assures her that she is still the same Kuo, just with powers.

The duo then run into a big battle between a handful of Militia and a Devourer, which Cole quickly dispatches, then clears the way for the ambulance to move. The Militia reappear as the ambulance moves along the nearby river and Cole runs into a Militia minigunner. After finally taking care of all the Militia, the duo continue and finally reach the rebel hideout.

The Hideout is Discovered[]

You brought in more than medicine, you stupid girl. This place used to be a secret!
― Laroche to Kuo.

Eventually the pair make their way to the Rebel hideout, deep within Ville Cochon, proudly announcing their delivery to the rebel leader Rosco Laroche. Laroche however berates them for leading the Militia to their secret hideout. A massive fight begins as numerous Militia troops pour into the area, determined to destroy the rebels and their base. After helping the Rebels, Laroche states that Cole is now seen as a true hero by his men and that the Conduit has earned his trust. He then announces that he'd be happy to help them take over Fort Philippe since the rebel hideout has been compromised and it's only a matter of time before more Militia arrive. 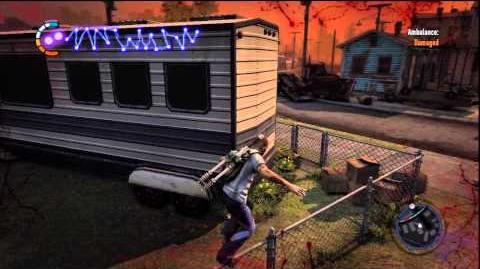 Story missions in Infamous 2
Community content is available under CC-BY-SA unless otherwise noted.