“I've spent most of my life behind bars. Its easy enough t' bust out. You just gotta wait fer that golden opportunity.”
— Hank

Henry 'Hank' Daughtry is a Conduit capable of absorbing and emitting Smoke. He appears in inFamous: Second Son.

Hank was a petty criminal who was in jail multiple times, always achieving escape, and fathering a daughter under unknown circumstances.

When his Smoke powers activated, he was unstoppable, and committed even more crimes until the Department of Unified Protection caught up with him. He was taken to Curdun Cay, a conduit prison where he was experimented on under the orders of Brooke Augustine.

The restraints he was forced to wear to keep him from using his powers made it impossible for him to feed, dress or even clean himself effectively stripping him of all of his dignity. When he was being transported into military custody, he smuggled in a paper clip which he used to initiate his escape, unaware that it was part of a grander plan by Augustine.

When the D.U.P. vehicle crashes, Reggie goes after the two other escapees: former drug user Abigail Walker and ex-high school student Eugene Sims. Hank is found by Delsin stuck under part of the vehicle's door. Delsin lifts it off of him, and Hank thanks him. Reggie returns to the scene of the crash, and Hank notices that Reggie is a sheriff. Hank grabs Delsin, stating he doesn't want to hurt anyone and asking to be let go.

He then shows off his abilities as a Conduit and attacks Reggie. Delsin tries to free himself, only to accidentally absorb Hank's powers and probe some of his memories. Delsin faints, and Hank escapes. When Delsin comes to, he witnesses Hank using his powers to trap Reggie under a tree and a vehicle. Hank then escapes again as Delsin goes to help Reggie.

Delsin eventually catches up to Hank, who has set the village longhouse on fire and is trying to explain to Betty that she needs to leave the building, to no avail. Delsin tackles Hank, allowing him to see into Hank's past. When Delsin comes to again, he and Hank briefly fight, during which Hank explains that he is unable to reverse what happened to Delsin and does not have time to teach Delsin to control his new-found abilities.

Eventually, Hank makes a run for it, stating that the fire he caused at the lodge won't provide a distraction for long. Upon escaping outside, he runs into a large number of D.U.P. waiting for him. His legs are encased and concrete as he begs to be let go. Indifferent to his cries for mercy, Brooke Augustine fully seals him in concrete and he is taken into custody once more.

Hank would not be imprisoned for long, within two weeks he had escaped once more and was on a rampage against the D.U.P. which attracted Delsin's attention. Hank and Delsin reluctantly forged an alliance. However Augustine caught up to him soon enough. Rather than attempt to recapture or kill the convict Augustine makes a new deal with him: she has already taken Hank's daughter into custody and in exchange for her safe return and Hank's freedom he must lure Delsin into a trap.

Hank explains to Delsin that his allies and fellow escapees Abigail and Eugene have been recaptured by Augustine, who uses them to lure Delsin into her trap. Realizing Hank's betrayal Delsin chases him off and he attempts to escape the city with the D.U.P.'s help but they turn on him. Regardless Hank still attempts to escape the city even with Delsin on his tail. Delsin finally catches up to him at the Marina. Hank reveals that Augustine had his daughter and he had no choice.

His daughter appears on a boat in the water crying out to Hank who attempts to answer, however he is restrained by Delsin. At this point Delsin can either spare Hank letting him leave with his daughter, or kill him in revenge.

If Hank is spared he offers Delsin the chance to disappear with him and his daughter. Delsin rejects the offer telling him to stay safe as he walks away.

If Delsin chooses to kill Hank instead, Delsin will tell him "Eye for an eye, asshole." and then strangle Hank with his chain. 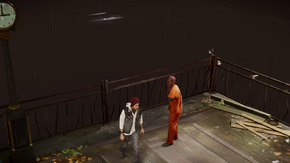 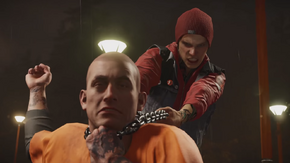 Smoke Manipulation: Hank is capable of absorbing smoke into his body and manipulating said element. He can also control smoldering embers and fire. Like Delsin he is able to turn into smoke to form short dashes, although his seems to cover more distance compared to Delsin's. He is also able to shoot out smoke in shotgun like blasts similar to Delsin. He should be capable of healing himself by draining smoke. He is shown to be capable of decimating squads of DUP soldiers and vehicles with his smoke powers.

Hank is an expert in escaping from prison having spent most of his life incarcerated. Because of this past experience he is the only prisoner in Curden Cay not to be broken by the experience, instead keeping his head and bidding his time for a perfect opportunity to escape.

Hank has a shaved head and multiple tattoos across his neck, arms and presumably other parts of his body. Hank is only ever seen clothed in his Curden Cay prison uniform; never having escaped long enough to secure a change of clothes.

Not much is known about Hank. He is a life long criminal who has spent most of his life in prison, giving him much experience in breaking out. He is very intelligent, biding his time by learning what information he can use for a golden opportunity to escape.

Hank can show some good nature at times, as he thanked Delsin when he helped him out of the wreck and continuously warned others about him not wanting to hurt anyone. Despite his diversion with the burning building, he still stayed and tried to, unsuccessfully, get Betty out of the burning building. He is shown to be afraid of Augustine. Hank's goodness is further shown in his DUP file where it states that he took pride in never injuring an innocent civilian. 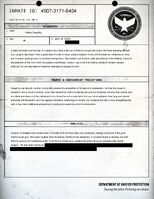 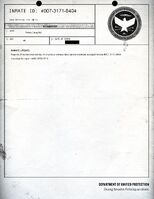 Part 2 of DUP report
Add a photo to this gallery

Retrieved from "https://infamous.fandom.com/wiki/Henry_Daughtry?oldid=79641"
Community content is available under CC-BY-SA unless otherwise noted.