This article is about Hero, the karmic rank. For the previous rank, see Champion. For the first rank, see Guardian.

Hero is the highest out of the Good Karmic ranks. At this rank, Cole MacGrath and Delsin Rowe are calm, collected, and heroic. Additionally, the citizens of Empire City, New Marais, and Seattle will begin to love and idolize them.

The people around here... they love me. How will that last? What's going to happen the first time they expect me to be there for them, and I'm not?
― Cole on the citizens of Empire City.

At this rank in Infamous, Cole is able unlock the final good upgrades. The citizens of Empire City considered him a hero, and many will aid him in his battles. This is surprisingly useful, since stones and blows from a crowd can stunlock enemies, and the enemies are not able to defend themselves since they must target Cole if they have spotted him. However, it makes it harder for Cole to hit the enemies due to the large number of civilians about. The soundtrack will become more heroic and tense.

Cole will look much healthier, and his clothes will gain a much brighter shade. Cole maintains his blue electricity.

Who would have guessed that the Demon of Empire City would become the Patron Saint of New Marais.
― Zeke Dunbar on Cole's sacrifice.

In Infamous 2, Cole will be able unlock the third and final tier of good powers. In addition, he gains the Bolt Recharge boost which causes the electricity meter to slightly replenish every time he successfully hits an enemy. The citizens of New Marais will consider him a hero, many will aid him in battle and many love him for who he is. The soundtrack will become more heroic and tense.

Cole will trade in his T-shirt for a white and gray one, and his track bag is replaced by a light green one. He wears blue track pants as well. He will look much healthier, and the scar on his cheek will become much less noticeable. The Amp will also become shinier, as if it were made of pure silver. Cole's idle posture will change to a more heroic and prideful one, and he maintains his blue electricity.﻿

And now, I was a guy kicking off the Second Age.
― Delsin narrating that he started a new age where humans and Conduits could live peacefully together.

In Infamous: Second Son, the final Good Karma rank is dubbed "True Hero", and unlocks the fourth and final tier of Delsin's good powers, along with the PlayStation 4 trophy of the same name. It is achieved by having done enough heroic deeds at Paragon rank.

Delsin's jacket becomes pure white, and he will look his healthiest. His vest logo will also change to the positive karma bird showing its wingspan, with white (or blue, depending on the color of the bird itself) having become part of the bird's torso and wings. There are no traces of the bird that represented negative karma. Also, his jeans become even bluer.

At Hero rank, the residents of Seattle will look up to Delsin as a hero, and will gain hope in his presence.

Delsin as a True Hero 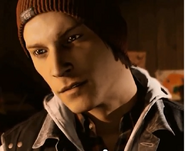