The Historic District was one of the three distinct boroughs within Empire City. It was also notably the location of where The Blast occurred and was originally controlled by the First Sons.

The Historic District was the third island that made up Empire City and is the final part the city that Cole gained access to, although it is the area Cole first wakes up in after the Blast.

This district holds the epicenter of the six-block detonation of the Ray Sphere that unlocked Cole's powers, but also set in motion the events that shaped Empire City into the hellhole seen by Cole now, two weeks after the explosion. Fremont Bridge, the drawbridge that once connected the Historic District with the Neon had only received minor structural damage from the blast, but as Cole approached the bridge, another surge of electricity ran through him, making him lose what little control of his power he had to begin with.

When powerful bolts of lightning manifested themselves around Cole, Zeke screamed that the "terrorists" were attacking again and called for Cole to cross the bridge into the Neon. As Cole made his way across, bolts of lightning followed him, obliterating the rest of the bridge and turning it into a gap of scrap-laced water between the two districts.

In the following days after and the start of the Empire City Quarantine, a shady organization known as the First Sons, who were already operating out of Empire City, quickly seized control of the Historic District due to a lack of law enforcement. Led by Kessler, they wore dark trench coats and gas masks. Because of the First Sons' involvement, the Historic District was arguably the most dangerous of the three districts. Due to their more professional attitude, they left many traps for Cole to stumble upon within the district, including ground based mines on most of the rooftops and large proximity bombs hooked to TVs found in random places in the city streets. Additionally, the Historic District suffered from a power blackout.

Later, as Cole started mastering his powers and liberated the Neon District and the Warren from the criminal factions that dominated them, he clashed with Dust Men leader Alden on the bridge connecting the Warren to the Historic District. After a large fight, Cole emerged victorious and entered the Historic District to prepare for a final showdown against Kessler and the First Sons. As Cole began to take down the First Sons who occupied the district, he eventually destroyed the Ray Sphere, but also witnessed Trish's death by Kessler, prompting Cole to vow to make Kessler pay. After a final showdown at Ground Zero that resulted in Kessler's demise, Cole liberated the rest of the Historic District and finished off the remnants of the First Sons. With all the factions eliminated, peace finally returned to Empire City with aid from the Empire City Police Department.

The Historic District serves as the cultural and historical area of Empire City and was home to the Art-Deco styled Staton Building, the tallest pre-Blast structure in the city with the Eagle Point Penitentiary coming in second. Even in its ruined state after the Blast, the building stood tall, although it would appear that it could collapse at any moment. The area seemed to be based off the New York boroughs of Brooklyn and Queens.

The substations of the district were never updated as the northern half of the island was actually powered by a substation in the Warren while southern half was powered by above-ground substations, which were activated during the mission Vengeance. These substations were above the ground probably to accommodate the new ability Cole acquires during the mission: Lightning Storm, which is only effective outdoors. The southern end held the ruined site of the Blast.

Ground Zero was the name given to the area where The Blast created by the Ray Sphere was activated, killing thousands of people and destroying five city blocks.

Cole MacGrath woke up injured in the middle of the crater generated from the explosion and was told by the police and his best friend Zeke Dunbar, to head over to Fremont Bridge and escape into the Neon District. Utilizing his parkour skills, he weaved his way through the parking lot adjacent to Ground Zero that now lies in ruins. His newly-discovered electrical powers went haywire, resulting in him accidentally destroying Fremont Bridge, using an uncontrolled form of Lightning Storm. He fell unconscious for four days, as outlined in the Prequel Comic. During the First Glimpse mission, The Voice of Survival broadcasted a message revealing that Cole was the one to detonate the bomb, turning the people against him.

In the climax of the game, Cole confronted Kessler in a final battle at Ground Zero in retaliation for the latter's murder of Trish Dailey. When Cole downed Kessler, he showed him one of his advanced forms of the Psychic Vision power. Kessler is revealed to be Cole himself from the distant future. When he married Trish with Zeke as his best man, a powerful Conduit known as The Beast killed his family and devastated Earth. He used his newest power to time travel far back in time to take over the First Sons, create the Ray Sphere, and organize The Blast to give Cole his powers and prepare him for his ultimate battle with the unstoppable Beast. There are also numerous Blast Shards hidden in and around Ground Zero, including the immediate area like the parking lot that Cole traverses in the Introduction.

In Infamous 2, Nix leads Cole out to the swamps where Bertrand activated another Ray Sphere. Cole identifies it as "A little piece of Empire City." Ground Zero flashes on the screen for a few seconds.

Ground Zero (which may have been known as Cathedral Square before the blast) seemed to be the only part of the city with a dead-end road. Looking at the city map in-game will show that all roads in the city, including bridges and tunnels, lead to an intersection or roundabout/traffic circle. The road within Ground Zero doesn't appear on the map but can easily be found in-game between the Staton Building and the bridge to the Neon. The raised section in the middle of the crater, where Cole wakes up, has a single yellow line that lines up with the others on the larger section of road leading to the bridge. It appears as though this road led directly from the bridge to the base of the Staton Building, but it can't be properly determined where it went from there, as there are no other road markings within the blast area. There are no other roads leading in or out of Ground Zero and the only other gap that appears wide enough for a road is next to the entrance ramp to the parking garage, but that area is fenced off.

The 22nd Precinct was a police station that consisted of the Empire City police forces that patrolled the Historic District. These cops were rarely seen outside of side missions.

The Blue Canyon Building was a structure where Cole and undercover agent John White met for one mission. After this, there was no other direct mention or interaction with the building.

The Ashford Building was an old and worn structure where John and Cole met on one occasion, when John mentioned to meet him at this building. After this, no further interactions between Cole, or any other character for that matter, and the building, were made.

Staton Building was located north of Ground Zero. It was the single largest structure next to Alden's Tower. In the first mission where Cole awakens after the The Blast, the building is clearly seen but suffered damage. The police tell him to make his way through the parking lot to the bridge connecting the Historic District and Neon District. Also, in the final mission, Kessler told Cole to meet him in front of the Staton Building.

In the evil ending, Cole was shown to be narrating the conclusion of the game while overlooking a destroyed Empire City from the Staton Building.

The Burial Ground served as a makeshift graveyard for those who lost their lives during the Empire City Blast.[1] It was once a normal park, complete with a playground and several terraces. After the explosion, it became a place where survivors of The Blast have buried their loved ones. It was located very close to Ground Zero.

After Kessler kidnapped Trish Dailey and tied her to a building rigged with explosives, Cole MacGrath had to choose to save her or several doctors that Kessler also captured. Either way, she fell to her death. Cole then buried her in this park with her picture on a cross.[2] It was here that Cole began sleeping next to his girlfriend's grave, since he didn't trust his friend Zeke at the time.[3] He continued to sleep here until the time came to deal with the Ray Sphere and Kessler. All of the wooden tombstones say the same thing: "Here lies Obadiah Wood. Died at age 36. Wood was his life, now in wood he stays."

The Blast from the perspective of a helicopter. 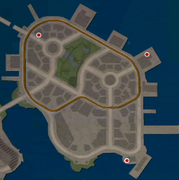 A map of the Historic District.
Infamous
Community content is available under CC-BY-SA unless otherwise noted.
Advertisement