Hit Squad Is one of the Evil Side Missions found in the Neon District in Infamous, in which Cole is being hunted by a Empire City Police department SWAT team.

Cole heads to one of the back alley's of the Neon, to meet an informant who warns him that “The police have a hit on you. Move now, and you can get the jump on them”. Cole makes his way to the streets and quickly tracks down the SWAT team, the highly trained officers try to take Cole down, but he swiftly defeats the team sent to take his life.

Cole defeats the police.
Add a photo to this gallery 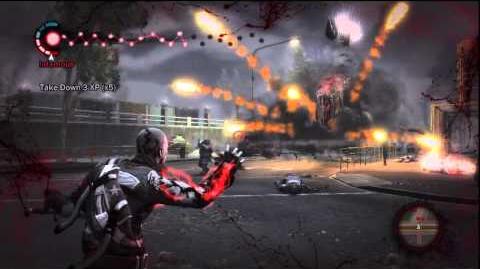 Side missions in Infamous
Retrieved from "https://infamous.fandom.com/wiki/Hit_Squad?oldid=105670"
Community content is available under CC-BY-SA unless otherwise noted.