Hunt for the Ray Sphere

Hunt for the Ray Sphere

"End of the Road"

"Hunt for the Ray Sphere" is the 34th story mission in Infamous.

As Cole waits atop one of the buildings in the Historic District, John arrives in a helicopter. He tells Cole to get on, then explains that the helicopter has a generator attached to the platform Cole is standing on to give him an infinite source of electricity. He further explains that Kessler had positioned a cloaked mobile jammer on each island to mask the frequency emitted by the Ray Sphere and though the dishes attached to the platform would help track the jammer's down, he warns Cole not to leave the platform until he gives the word, worried that if they make a mistake, Kessler will move the jammer's.

As they make their way to the first jammer in the Neon District, the helicopter comes under attack from members of the First Sons wielding RPG's and grenade-launching drones. With unlimited electricity at his disposal, Cole defends the helicopter and at John's word, jumps down and destroys the jammer with a lightning storm.

But even if that fails, they still have you. Their very own WMD
― John warns Cole

Flying through the Warren District, past the damaged Eagle Point Penitentiary,

John asks Cole what his plan is for getting out of the city. When Cole's answer doesn't impress, John warns him that "they" will try and recreate the Ray Sphere and if that fails, they will capture and use Cole.

Ignoring John's words, Cole continues fighting the First Son troops that line the buildings and streets of the Warren. Finally locating the next jammer, Cole leaps from the helicopter platform and once again deals with any resistance before unleashing a second lightning storm.

I don’t want you to say anything. I want you to disappear. Because if I find you, things are going to get ugly
― Cole threatens Zeke

Making their way back to the Historic District and the final jammer, Cole faces a large number of First Son troops, including a Aura Conduit. Once their attackers are dealt with, John flies the helicopter over the water, towards Ground Zero whilst Cole receives a call from Zeke who begs his friend to pick up. Cole replies by saying he has nothing to say to him, that he blames him for Trish's death,[1] and that if he finds him, things will get ugly.

Arriving at the parking lot, next to the blast crater caused by the Ray Sphere explosion, John tells Cole that the last jammer is somewhere within the parking lot, but he is unable to pinpoint it's exact location. Cole makes his way through the debris, dealing with any First Sons he encounters along the way, until he finds the final jammer and destroys it. He contacts John with the news, who replies that he needs to get a few things ready before they go after the Ray Sphere, and tells Cole to get some rest, warning him that when they make their move, “Kessler’s going to hit us with everything he’s got.“

Taking out the first Sons. 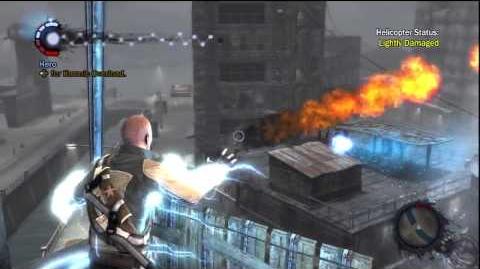