View source
watch 01:57
'inFAMOUS: Festival of Blood' Launch Trailer
Do you like this video?
Play Sound
The following is based on non-canon content and is not considered to be part of the Infamous continuity.

Vampires have overrun New Marais and have taken Cole MacGrath and his blood for the resurrection of their leader. He has one night to find and kill the Head Vampire, a.k.a. Bloody Mary, and save the city. Otherwise he will remain a vampire and be in Bloody Mary's control forever.[1]

Taking place as a sequel to inFamous 2 where Cole returned after being assumed dead at the end of the prior game,[2] Festival of Blood opens with Zeke sitting in a bar reading what appears to be a vampire comic. He spots a woman approaching the counter who orders a beer, to which he also orders one and offers to pay for her beer as well. The woman claims that she's capable of paying for her own beer, to which Zeke simply replies "Good, glad to hear it, you can get the next round".

He looks her over and notices that she isn't from New Marais, so he decides to tell a story to try woo her. Reluctant to listen to Zeke, the woman ignores him and claims that she has better things to do than spend time with someone that reads "kiddie books". Zeke then claims that his so-called "kiddie book" helped him save Cole from eternal damnation. Gaining interest by his mention of Cole, the woman sits down to hear his story. He asks if she's ever heard of Pyre Night, to which she replies that she hasn't, and he begins his story.

Zeke explains that Pyre Night is an event in New Marais where the citizens "go certifiably ape-shit" for the festivities. They string up demonic balloons, dress up as monsters and ghouls and get drunk to celebrate this event. But it seems that not all of these people have a good time.

Cole MacGrath soon hears screams for help emerging from beneath the cathedral. He makes his way through the catacombs looking for any civilians in trouble, and soon finds at a woman calling for help, but when he tries to assist her, she quickly knocks him out.

A group of vampires then proceed to drag him into a room containing a female vampire's carcass. Waking up and surrounded by vampires, Cole's neck is cut, allowing droplets of his blood to drip into the corpses mouth. As the vampires watch the ceremony, the blood awakens the vampire. Thrusting herself at Cole, the vampire bites his neck and drinks his blood, slowly rejuvenating her body until she becomes a beautiful red-haired woman. Cole then collapses to the floor as the vampires in the room begin chanting the resurrected vampires name: Bloody Mary.

Cole slowly gets to his feet while Bloody Mary adjusts to her resurrection. She tells Cole that come sunrise, he will be her slave and that there's nothing he can do to change that. Cole tries to fight Mary, but she raises her hand, stopping him, stating that she will not allow it as she has control over his actions. She begins to make her way out of the catacombs, with Cole following closely behind, at one point he is accosted by one of Mary's minions and, noticing that the Amp is missing from his backpack, pulls a cross out of a nearby coffin, creating a makeshift stake. After disposing of the vampires in the catacombs, Cole follows Bloody Mary to the surface of New Marais.

Outside Fort Philippe, a party girl approaches Cole, looking for directions, when, suddenly out of instinct, Cole runs to her, biting her neck and drinking her dry.

Telepathically, Mary contacts Cole to tell him about his new abilities. He learns the Shadow Swarm, which allows him to reconstitute his DNA into a swarm of bats, letting him fly above the streets of the city. Then Bloody Mary informs him that “her vampire minions” will be testing him throughout the night, stating that she “wants to see what he can do”. Cole phones Zeke and tells him what has happened. Zeke laughs at first, asking if “teenage girls suddenly find him irresistible”. It isn't until Cole goes into more detail that Zeke realizes just how serious the situation is and begins to help Cole work out how to kill Bloody Mary and cure his vampirism.

Cole makes his way to Smut Triangle where he is accosted by a group of Bloody Mary's minions. Speaking to Zeke, Cole learns that the cities Cathedral is named after the priest that had stopped Bloody Mary years before. As he reaches the Father Ignatius' statue, Bloody Mary sends a group of Harpies to attack him. Dispatching them, he heads to the Clock Tower where he watches a shadow theater show, which tells of Bloody Mary's time in New Marais, how Father Ignatius rallied the city against her, and that he was buried with the one weapon that could stop her, the Barbed Cross.

Zeke quickly locates Father Ignatius' grave. However, when Cole arrives at the graveyard he finds that two of Bloody Mary's Firstborns have beaten him to it, while Cole battles against one, the second one has escaped with the cross. Before he has chance to give chase, Cole is overcome, hearing Bloody Mary's voice inside his head. She berates him, asking why does he wants to hurt her, and tells him about all the power he now has as a vampire. Using one of these new powers, Vampire vision, Cole proceeds to track down the Firstborns hiding in the Pyre Night crowds.

Discovering them, Cole then tracks the Firstborn with the Barbed Cross back to the catacombs. Defeating the Firstborn and a hoard of Bloody Mary's minions beneath the city, Cole finds the Barbed Cross' box. Though empty, it gives details of how the cross was made. A core of sacred wood, edged in silver from King Solomon's temple, dipped in holy water blessed by the Pope of New Marais.

Returning to the catacombs beneath New Marais in search of the Barbed Cross, Cole finds secret doors with elevators behind them, each containing tanks of white phosphorus ready to be lifted to the city above. Between them, Cole and Zeke figure out Bloody Mary's plan to burn New Marais to the ground, allowing her to finally have her revenge on the city that had burned her so many years before. Cole then destroys the elevators, and makes his way back to Mary's crypt where he finds details of Mary's early life and how she had been on her death bed when an admirer turned her into a vampire, though the Barbed Cross is still nowhere to be found.

One Hour Before Sunrise

Why would you want to hurt me with that cross Cole?
― Bloody Mary.

As Cole makes his way back out of the catacombs, Zeke informs him that "a big old bloodsucker" has the Barbed Cross and is circling round the area. Meeting up with his best friend, Cole watches the Firstborn fly from roof to roof before chasing after him. Catching up with him, Cole attempts to fight, but is stopped telepathically by Bloody Mary, who informs him that he should be “kissing the hem of her dress” for the gift she has given him. Resuming the chase, Cole manages to harm the Firstborn, but once again Bloody Mary stops him, informing him that her patience is wearing thin. Cole then finally tracks down and defeats the Firstborn.

Combining his amp and the Barbed Cross, Cole makes his way across town to confront Bloody Mary, while Zeke heads beneath the city to collect the white phosphorus bombs. Cole then proceeds to fight Bloody Mary (and her minions) across the city. He later ends up finally hitting her with an Ionic Storm as she hovers above Father Ignatius statue. The force of the storm shatters the statue and the ground around it, throwing Bloody Mary into the catacombs below.

Just accept some help man, I know you’re a superhero and all, but you can’t always do it on your own!
― Zeke helps Cole out

Telling Cole to watch the exit, Zeke starts arming the bombs he had recovered

from around the catacombs, whilst Cole defends him from vampires trying to stop them. Aware of the danger, Bloody Mary tries to flee, only to be stopped by Cole. Once the bombs are primed, Zeke and Cole make a break for the exit. Unfortunately, just as they reach the stairs back to the surface, the sun begins to rise. Cole, still in his vampire form, begins to disintegrate and catch fire. As Zeke turns to assist his friend, he sees Bloody Mary trying to escape from the catacombs, causing him to quickly detonate the bombs, killing Mary, ending Cole's vampire nightmare, and saving New Marais.

His story complete, Zeke appears to have suitably impressed the woman.

They are making plans to go to his place, where he promises to show her what he can do with a "feather and an electric tooth brush" when Cole walks in. Requesting his friend's help in retrieving his Amp from a pool, Cole is cut short by Zeke who, after pointing at his companion, explains he's "kinda busy here man". The woman then volunteers to help, tipping Zeke off that she is more interested in Cole. As she and Cole leave the bar, she turns around and thanks Zeke for the story saying it was "very educational" before flashing her vampire fangs, causing Zeke to scream.

Cole in his Vampire State.

Cole feeds on a Citizen.

A screen of Festival of Blood's Gameplay.

The vampires who kidnap Cole.

Cole along with the stake, his new Amp.

One of Bloody Mary's Harpie's

New Marais, in Festival of Blood

The pause menu in FoB. 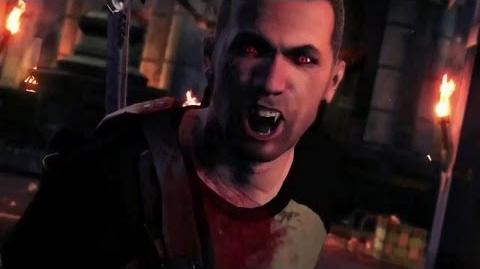 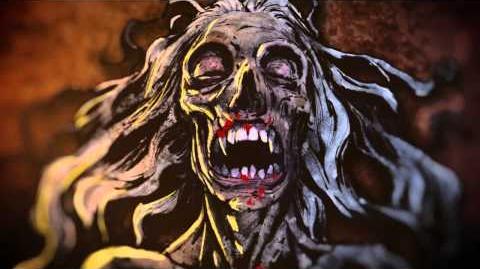