Start a Wiki
The following is based on non-canon content and is not considered to be part of the Infamous continuity.

Infamous: Precinct Assault is an Infamous series spin-off. The game was previously able to be found on the first Infamous game's own website, as well a high score table. It is assumed that the game takes place during the events of Infamous, as Cole has powers and his iconic messenger jacket.

Precinct Assault is a 2D side-scrolling version of Infamous.

Lightning Bolts
Add a photo to this gallery

When near an electricity source

When near an injured civilian

When near a locked door
Add a photo to this gallery 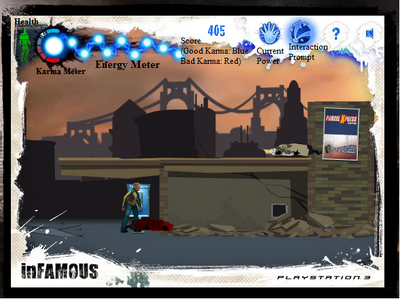