Enjoy your power.
― Tagline of the game

Infamous: Second Son (stylized as inFAMOUS: SECOND SON) is the third main installment in the InFAMOUS series and is a PlayStation 4 exclusive. It features a new setting, a new protagonist, a totalitarian government controlled by propaganda, and a new antagonist, the D.U.P. (Department of Unified Protection). It is set seven years after the end of Cole MacGrath's story and stars a new protagonist, Delsin Rowe.

InFamous: Second Son was first announced at Sony's PlayStation 4 Press Conference on February 20, 2013, after officially announcing the successor to the PlayStation 3.[1]

Sucker Punch's Nate Fox first announced Second Son at Sony's PlayStation 4 press conference. Fox described a world under government observation and control and then asked what would happen if citizens suddenly received super powers. The trailer revealed a city run by police, with a citizen running from the police through an alley before he turned around and used some sort of power to destroy an armored vehicle, while using the chain wrapped around his right wrist as a weapon.

The game is set seven years after Cole MacGrath activated the Ray Field Inhibitor (RFI) to destroy a Conduit (a superhuman named for their ability to channel powers) named John White AKA the Beast and cure the Plague, sacrificing himself and the conduits alive then. Fearing the Conduits' abilities, the United States forms the Department of Unified Protection (D.U.P.), an organization that handles any sort of bio-terrorism to ensure that events similar to those of Empire City and New Marais do not happen again.[2] It is also revealed that the D.U.P. renamed Conduits "Bioterrorists" and have been rounding them up. Using propagandized messages via news and public services, the D.U.P. forced many Conduits out of hiding by turning the general public against them, and sent them to Curdun Cay, a prison designed to contain and experiment on Conduits. The developers assumed the good ending of Infamous 2 as canon and that, rather than the RFI destroying all Conduits, some survived the explosion. While it was originally thought to have killed all Conduits across the globe, some Conduits proved resistant to the device due to the long distance from New Marais. Rather than the fictional cities of the previous two games, InFamous: Second Son takes place in Seattle, although locations and features have been changed to allow for better gameplay flow.

As in inFamous and inFamous 2, Karmic choices plays a role in the main story. The protagonist, Delsin Rowe, has the ability to absorb other Conduits' powers, replacing the electric-based powers of Cole MacGrath from Infamous and Infamous 2 with multiple others. Every power that Delsin gets drastically changes the way the game is played. Over the course of the entire game, Delsin gains access to new abilities by allying with other Conduits and absorbing their powers. By the end of the game, Delsin has absorbed the powers of four Conduits, and thus has access to four different powers. While Delsin can have access to only one of his powers at a time, he can easily switch by absorbing the corresponding power source.

For the first time in the series, the player will be able to shoot without having to aim beforehand (although it is still an option) to instill a sense a fluidity and quickness in gameplay.

Since the DualShock 4 controller has greatly improved, handling, aiming, and shooting will be done through the L2 and R2 trigger buttons while elements under Delsin's control (smoke, neon etc.) are absorbed from sources by pushing one thumb on the left side of the DualShock 4's touch pad.[3] The powers can be switched by absorbing their corresponding element.

Destruction has been greatly improved from the past games. More objects can now be destroyed and will stay destroyed for the rest of the game, unlike in previous inFamous titles.

On October 17, 2013, it was announced that there would be Limited Edition and Collector's Edition variants of Second Son, which could be pre-ordered.[4]

This edition, when pre-ordered, also comes with the exclusive Cole's Legacy. It retails at $59.99 MSRP.

This edition comes with:

This bundle was available only at GameStop.[5] It included:

Delsin getting ready to do an Orbital Drop

Seattle, as seen in the trailer. 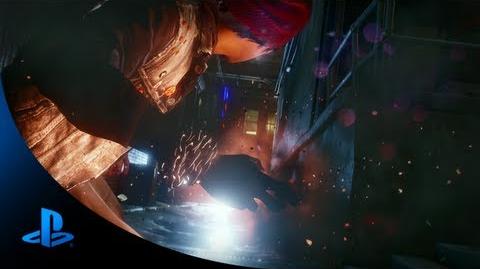 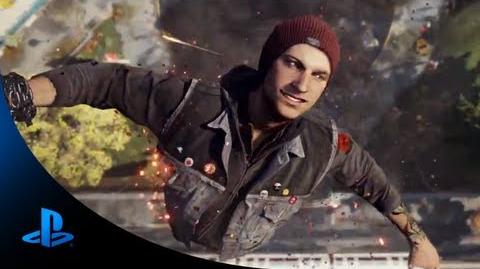 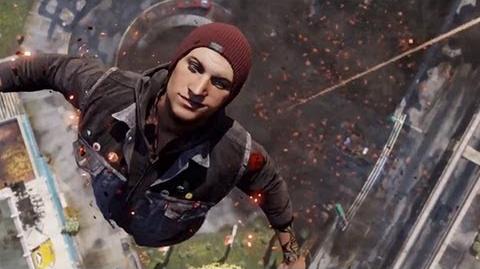 Gameplay Showing Off Both Good and Evil Karma