watch 01:51
'inFAMOUS 2' Karma Trailer
Do you like this video?
Play Sound 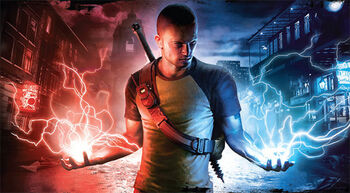 Karma is an integral part of the Infamous series, and heavily affects the overall game. It is present in Infamous, Infamous 2, and Second Son.

In the inFAMOUS series, nearly every action and decision Cole MacGrath and Delsin Rowe make affect them either positively or negatively. Depending on how drastic a decision is, the end results can be subtle or significant. Cole and Delsin's actions change their appearance, how their powers develop, the successive chain of events that happen within the story, how people and major characters react to their actions, and the very ending of the game.

Delsin's Karma level is exclusively represented by two birds on the back of his jacket. These birds' appearances look identical to each other, but slowly change depending on Delsin's Karma. Good karma is represented by a blue and white eagle which evolves to look more noble, with its wings appearing cleaner. Evil karma is represented by a red vulture which evolves to look more evil, with its wings appearing sharper, and bones being implemented in the design. Whichever Karmic state Delsin is in affects which bird overpowers the other.

Cole and Delsin are able to gain positive Karma by doing good things to the people. During this mental state, Cole and Delsin are more calm and collected, and are willing to sacrifice themselves to situations that mostly only benefit others, but not themselves. This reflects their powers; able to focus and take down single enemies more accurately, avoiding large, uncontrolled attacks that could hurt or kill innocent bystanders. Cole and Delsin also remain the same during this mental state, appearing as the "symbol of help". Civilians also look up to Cole and Delsin with awe, love, and respect, often cheering as they go by.

The ranks available in positive Karma for Cole are: Guardian, Champion, and Hero.

The ranks available for Delsin are: Protector, Guardian, Champion, Paragon and True Hero. Each rank is represented by vest designs.

True Hero
Add a photo to this gallery

Cole and Delsin can gain negative Karma by focusing mainly on self-benefit, caring less for others. During this mental state, Cole and Delsin are ruthless and aggressive, which also reflects their powers; their attacks become more destructive and scattered. Cole's appearance is drastically changed during this state, his skin appearing a pale gray, and his track suit turned into black and gray. Dark markings that look like electric currents also appear on Cole's skin. In Infamous 2 Cole's black and yellow T-shirt becomes orangish-brown and black and his track pants become black with red stripes. Delsin gets red marks on his face and appears to be lacking sleep, as he has gray marks under his eyelids, he also looks more sinister and angrier because of this. His hoodie and jeans slowly change from gray to red and black respectively.

The ranks available in negative Karma for Cole are: Thug, Outlaw, and Infamous.

The ranks available for Delsin are: Thug, Criminal, Bio-terrorist, Most Wanted and Infamous. Each rank is represented by vest designs.

Infamous
Add a photo to this gallery

Gameplay and some restrictions

In addition to having a cosmetic affect on Cole and his powers, this determines the way his abilities will evolve. There are six upgrades for all the major abilities in the original inFamous game, three good and three evil, with each of the three levels unlocked by obtaining a certain rank. This means you cannot buy a basic upgrade unless your rank is Thug/Guardian or higher, and you cannot buy the ultimate upgrades unless you are at Infamous/Hero.

In the first game, seemingly to prevent grinding up to Hero or Infamous rank too early in the story, the bar's progress is mission-gated: Cole can only gain a set amount of Karma in one direction before the bar stops moving. If the bar does not flash blue or red when Cole performs a heroic or evil act, he has reached the current plateau for gaining karma. This is particularly noticeable in an evil playthrough, where random destruction very quickly stops resulting in karma gains. The only way to gain more is to progress the story: Hero or Infamous becomes possible in whichever storyline mission the player chooses after completing Playing Hero.

Also in the first game, the final evil Karmic choice causes Cole to be in a rank called "Truly Infamous". It is similar to the Infamous rank, except Cole's Karma will be locked to this rank for the rest of the game, meaning that Cole cannot switch to Good Karma, nor can he revert back to the lower stages of Evil Karma. If the player wishes to be able to switch Karmic alignment in the future, then the final good Karmic choice must be picked, regardless of current Karmic state.

In inFamous 2 there is no such limit: it is possible to reach Hero or Infamous rank as soon as the player wishes to if they are willing to grind for it. Game balance is instead enforced by locking most of the high-level powers until Cole uses the Power Transfer Device.

Additionally, when the player has completed both a Good and an Evil run in inFamous 2, all of the Karma-restricted powers are unlocked, and Cole may fulfill the unlock conditions for and acquire Evil powers if he is Good or vice versa, even those that require use of the Power Transfer Device. The only abilities not unlocked in this way are the boosts for being at a particular Karma rank: Cole will still have to be Infamous to get Bio Leech Overload, for example.

In inFamous, there are 30 side-missions tied to the Karma system, 15 good and 15 evil. By completing set amounts of these missions, you can unlock new abilities tied to your Karmic state. Upon completing 5 missions with the same Karmic alignment, Cole will be granted a new power - either Overload Burst (good) or Arc Lightning (evil). Subsequent upgrades to these abilities are available upon completing a total of 10 and 15 missions. Each time you finish a Karma side-mission, one Karma side-mission of the opposite side is locked out, so you can only ever complete 15 of the total 30 missions in one playthrough.

Note: Both Karmic upgrades and powers require you to be at the rank they're unlocked for them to work. Despite costing no XP, they also need to be "bought" from the Powers menu by selecting them.

A meter containing six sections (three for good, three for evil) acts as Cole's basis on what Karmic level he's on in inFAMOUS. As Cole interacts with the world and makes good/evil choices, his Karma is tallied up on the meter, and depends on what act he's done. Depending on his actions, Cole's good/evil rank will go a rank higher, and will alter him depending on the action. The meter functions identically in Infamous 2 as it does in Infamous.

In Infamous: Second Son, the meter acts a little differently. Instead of having multiple sections shown at once, the meter is shown as just one singular bar. The bar fills in as Delsin performs acts that follow his current karmic route, and is emptied if he does otherwise. Once the meter fills, Delsin's karma rank increases, and the bar is emptied so that he may fill it and rank up again in the future.

There are several Karmic Moments that occur throughout the game, often presenting Cole with a choice between acting for Good or Evil. Cole is given a set amount of time to analyze the decisions and the results they will bring. Cole is then to decide what to do with the situation, and depending on his choice can either seek to help others or himself.

In Infamous: Second Son, the Karmic Moments are highlighted by the screen turning to black-and-white, and an L2-R2 option being displayed on the screen, confirmed by tapping the X button. The decision shows a description of what will happen should it be chosen by pulling the appropriate trigger. L2 is good, R2 is evil. 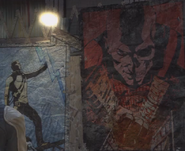 Cole during a positive karma shift.

Cole during a negative karma shift.
Add a photo to this gallery
Infamous
Infamous 2
Infamous: Second Son
Gameplay
Retrieved from "https://infamous.fandom.com/wiki/Karma?oldid=110487"
Community content is available under CC-BY-SA unless otherwise noted.