King of the Hill

King of the Hill is an Evil Side Mission in Infamous 2.

“Throw these bastards off the roof! Let people see what happens when they cross us!”
— Nix encouraging Cole to kill the prisoners.

The mission begins when Nix calls Cole and tells him that the Rebels are killing off some of their Militia prisoners, and that Cole has to show them what he can do with his powers.

Cole heads to the rooftop where the Rebels and Militia are, and uses his electric powers to kill them, but as he does so, a helicopter spots him and starts attacking him. Cole has to defeat the helicopter to finish the mission. 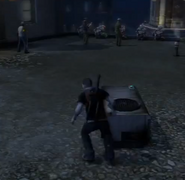 The Militia and Rebels.

Blasting off the Militia.

Defeating the chopper.
Add a photo to this gallery

Side missions in Infamous 2
Retrieved from "https://infamous.fandom.com/wiki/King_of_the_Hill?oldid=105713"
Community content is available under CC-BY-SA unless otherwise noted.