Alright, who's going to join me in attacking the plantation; freeing your friends?
― Cole speaking to the army of policemen.

Cole starts this mission near the Cathedral. Zeke explains that the Militia convoy has most of the cops that used to fight them and that it would be worth it to free them. The Militia has spared almost no expense guarding these captured police men with upwards of 3 dozen men, trucks, and an attack helicopter. Getting the cops out will require Cole to beat all of the Militia. Once Cole defeats all the Milita and gets the truck open the police officers grab some guns and head to the plantation with Cole.

With an army of cops behind him, Cole heads to the plantation determined to free his captive friend. The plantation is crawling with Militia guards and odd containers. Cole's army won't keep the Militia busy enough not to notice Cole's presence but it should be easy for Cole with his new Ionic powers. Despite the Militas numbers and their more advanced weaponry Cole and the NMPD are able to hold their own and eventually defeat them, Cole then heads to the bunker next to the house but a huge explosion prevents him from getting in. A mortar is keeping tabs on the hero and he cannot get Kuo out in this fire. With the first mortar out of commission, two more lock their sights on Cole and the Cops. Destroying them is imperitive to both his survival, the police, and saving Kuo. With all mortars destroyed, Cole returns to the bunker to resume his mission of saving Kuo.

Entering the plantation bunker, Cole makes his way underground to locate and rescue Kuo. He finds her suspended, hanging from heavy restrains and attacked to an unknown device. Loosening her restraints with a bolt of electricity, though as he carries her out of the bunker Cole worries that he may have "over done it"

Once outside, a badly shaken Kuo makes here way towards Zeke's truck as Cole protects her from not only the remaining Militia members but the Ice Soldiers now escaping from the bunker. Reaching the truck Cole quickly jumps in the back beside Kuo, before Zeke drives away. 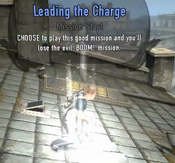 A Militia with a mortar.

Kuo, before being saved.

Cole escorting Kuo.
Add a photo to this gallery 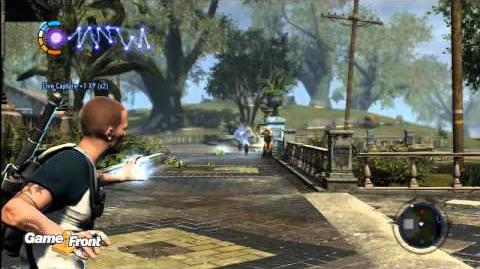 Story missions in Infamous 2
Retrieved from "https://infamous.fandom.com/wiki/Leading_the_Charge?oldid=109891"
Community content is available under CC-BY-SA unless otherwise noted.