Light in the Tunnel

"Light in the Tunnel" is the 26th story mission in InFamous as well as the penultimate sewer mission.

Cole must head into the sewer system to locate and activate the a disabled substation, in order to bring power back to the immediate area.

Getting to the sewers[edit | edit source]

Waking up at Bayview Hospital, Cole is contacted by Moya, who demands to know where he's been. Cole informs her that Alden has escaped from Eagle Point Penitentiary. Moya then harshly replies that it is unacceptable and inquires to know why he has escaped. Cole puts the blame on Zeke for not helping the guards in making sure Alden was kept secure in his cell. Moya responds by telling Cole to cut ties with his best friend, claiming that he is becoming a liability and that they have no room for error, especially with Alden prowling the streets once more. Not really in the mood to talk to Moya further, Cole cuts her off by saying he's fixing to make a run on the next substation.

While heading to the location marked on his GPS, Cole receives yet another call, this time from Trish, who lets him know that an upset Zeke is with her at the hospital. After a brief conversation between the two, Cole fights his way through several groups of Dust Men before finally making it to the manhole cover and the sewer below.

Light in the Tunnel[edit | edit source]

Ah yeah, that's the smell I know and love.
― Cole commenting on the sewers.

Once in the sewers, Cole heads for the generator and once again re-establishes a circuit, which nets him the Polarity Wall power. He uses this newfound power to his advantage as he picks off Dust Men members and protects himself from gunfire. Soon after recharging the substation, power is restored to the remaining territory in the Warren as well as the northern half of the Historic District.

As soon he exits the sewers, Cole is contacted by John White, who says they need to talk. Cole asks where he is and the John tells him to meet him at the Adams building, and to come alone. Cole then tells Moya the good news and mentions he's finally starting to see "light at the end of the tunnel."

Charging the substation
Add a photo to this gallery 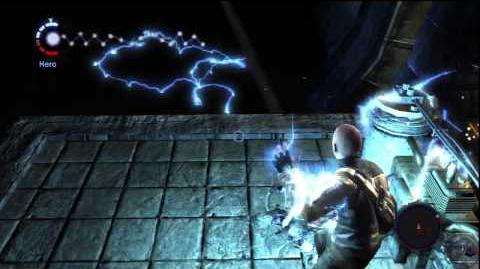 Story missions in Infamous
Retrieved from "https://infamous.fandom.com/wiki/Light_in_the_Tunnel?oldid=105686"
Community content is available under CC-BY-SA unless otherwise noted.