Marco was a vampire and the partner of Bloody Mary, who he turned into a vampire. He and Mary went across Europe together, killing people solely for blood.

Marco was a vampire, though how he became one was unknown. He was secret admirer of Mary, a local governess. When she was dying of smallpox, Marco decided she was too beautiful to die and transformed her into a vampire.

After turning Mary into a vampire, they became partners and later fell in love. The two went across Europe, killing dozens of people for their blood. Unbeknownst to Marco however, Father Ignatius believed that by killing him, Mary would become human again, however this only applied for the first night of a human's conversion into a vampire. Marco was killed by Ignatius with a stake. 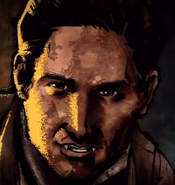 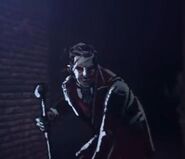 Marco, moments before his death.
Add a photo to this gallery
Retrieved from "https://infamous.fandom.com/wiki/Marco?oldid=110794"
Community content is available under CC-BY-SA unless otherwise noted.