"Masquerade" is a side mission found in the Smut Triangle area in Infamous 2, in which Cole must defeat a group of disguised Militia members.

“Hey man, some of the militia are disguised in the park nearby. Go check it out!”
— Zeke calls Cole.

Zeke calls Cole and warns him about a group of disguised Militia members in a nearby park. Heading to the park at the heart of

Smut Triangle, Cole finds a suspicious group of Street Performers. Once Cole gets closer to the group, they begin to attack. Although there are 15 to 20 of the fake mines, they are unarmed, and after a short fight, Cole defeats them all.

Taking out the Mimes

The Fake Street Performers
Add a photo to this gallery 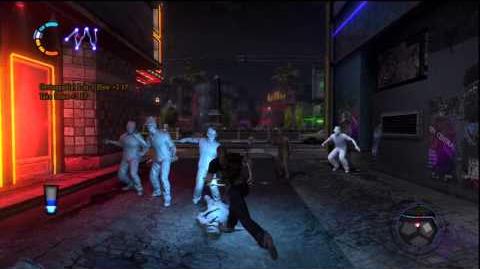 Side missions in Infamous 2
Retrieved from "https://infamous.fandom.com/wiki/Masquerade?oldid=105739"
Community content is available under CC-BY-SA unless otherwise noted.