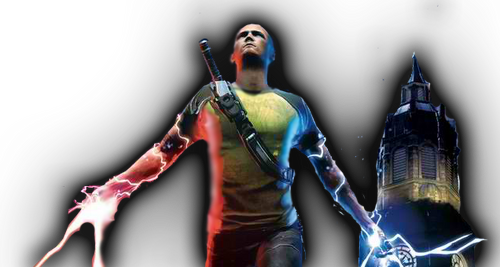 Hello, and welcome to this humble wiki, Redexx! There's a lot to do around here, so why not help us out and get started? Here's some guides to help you out.

With "friend" I think you're refering to Collin over at the SP forums. He's an Sucker Punch employee and administrator at the Sucker Punch forums who keep the forums clean, answers questions and more. Anything said by him that I am aware off can already be found here on the wiki. For "secret" information that no one else will know, that none can simply gather since Collin can't give away information not intended for the public to know. So basically ... I'm as clueless as you are. And for the rankings, it is nothing that determintes your level of "skill" or "abilities", it is simply something to make editing more fun. Basically, the more you've contributed, the higher up you get. Just remember to read the Achievements Policy (and if possible, any other policies in the meantime), since Badge Hunters (those who abuse the achievements system) may be subject to warnings and potentially a block from editing (but not visiting) the wiki for a period that can extend to periods over a month, depending on the case. Don't worry, though. If you read the policies carefully, there is nothing to worry about since all users must abide them. Including admins, moderators, unregistered user etc. It may look like a lot to read, but I highly recommend reading it along with the Manual of Style, since it provides some basic information on how to format and edit inFamous Wiki. If you are ever unsure about anything (policies, how to edit, etc) don't be afraid to ask. Some parts of a wiki can be complex for even the most experience users, so if someone can't answer your question, there's surely other users who can. Cheers! --Alareiks | 00:25, October 1, 2011 (UTC)

You removed a part of the userbox code. The |} part, to be precise. Below the Coming soon! part of the code (if not visible in the rich text editor - aka. visual mode - use source mode to see it), add |} and it should be fixed. If not, simply restore your userpage to a functioning version. Cheers! Alareiks | 00:55, October 3, 2011 (UTC)

Your friend's out of commission, and won't be back anytime soon. So I'll be your regular service provider from now on. Anyway, to link a page, use ''' and ''' at the beginning and end of the page title respectively. For example, you type in [[inFamous 2]] to get inFamous 2. The title you type in inside the brackets have to be exactly the same as the page title, or the title of one of their redirects. Else, they'll be a red link, like this one: iNFAMous 2.

And that's all I have to teach about linking. Have any questions, direct them to my talkpage and I'll attend to it ASAP. --WarClown Dial-UpinFamous 05:58, October Jack]] WallsinFamous 12:04, October 9, 2011 (UTC)

No problem at all. If it wasn't for his edit to my talk page, doubt I would have known about this trouble. In case he returns and i'm not here, contact one of the admins listed below;

How can a goldfish commit Suicicde?

The Voice of the Voiceless

Im so sorry, why did it commit suicide?

The Voice of the Voiceless

I investigated some, and there has been an admin and a bureaucrat who have edited within the last 2 months, which can be seen here. This basicly means the wiki has a very low chance of being adopted. Just keep up the good work and keep editing and I'm sure you will eventually get it --Frederick (Talk) {Twitter}

Did the militia die I just wanna know so don't say bad stuff or I will beat you down I can petrify you in one touch b****. —Preceding unsigned comment added by Theoriginalvampire (talk • contribs)

sorry about those edits I thought cole didn't die and I thought all the militia died I am so sorry I didn't knowTheoriginalvampire 01:04, January 22, 2012 (UTC)

Thanks for the thanks

just a quick thanks for your thanks, admin.... wow sounds scary!

just a quick thanks for your thanks, admin.... wow sounds scary!

Thanks for the tip, we have been getting a lot of random/weird edits over the last few days, I wonder who let the loons out!
Putowtin - Light Love and Peace 23:28, February 9, 2012 (UTC)

You seem to be a regular editor so I want your opinion, the Goofs/Errors page, I think it's pointless and all the goof's/errors Jims listed I've answered on the talk page. Have a read and let me know what you think.
Putowtin - Light Love and Peace 09:24, February 19, 2012 (UTC)

Heya! Yeah, I'm staff at ACwiki too... I already feared War had left this place too, since he's also semi-permanently deserted ACwiki and his own batman wiki. Thanks for pointing me in the right direction though ;) Nesty Contact me! 21:15, February 21, 2012 (UTC)

Does Alden Tate die in the Evil karma because I forgot.Theoriginalvampire 21:10, February 26, 2012 (UTC)

I don't mean to be rude, X, but who the....is Red X? —Preceding unsigned comment added by AssassinHood (talk • contribs)

Humm, havn't noticed anything, but I'm about to swap computers so I'll see if anything changes. Putowtin- Light Love and Peace 18:33, February 29, 2012 (UTC)

They could be just shouting it cause he looks like a corpse! I just don't want people adding that Festival of Blood took place after the events of IF2, when it can't (due to Sucker Punches timeline)
Putowtin- Light Love and Peace 22:54, March 1, 2012 (UTC)

I had a feeling that it wasn't an official quote, mainly because the term cartooney refers to someone pretending to be a lawyer! Thanks for looking though.
Putowtin- Light Love and Peace 20:52, March 11, 2012 (UTC)

Yes I do indeed, and you are also one of the few people I've met who have actually seen it or heard of it or care about it. Did you watch the originals or just the new crap? Electric Tuna 19:49, March 15, 2012 (UTC)

Tenth is my favorite too, I like 11 but his stories aren't good enough for that Doctor. I also prefer Jon Pertwee, Tom Baker is good but Jon's Doctor can beat the crap out of an Orgon and then sit down and have a cuppa. He's badass.

Did Cole really become a vampire? Or was that just Zeke trying to be cool.Theoriginalvampire 12:40, April 7, 2012 (UTC)

Did you play Festival of blood? If you did how many stars would you give itTheoriginalvampire 14:25, April 10, 2012 (UTC)

Hi, sorry about editing to that extent. I'm simply reading the articles and find some typos here and there. I fix them where I find them, and tend not to read ahead to find another one. It was never my intention to edit as I did.

Retrieved from "https://infamous.fandom.com/wiki/Message_Wall:Redexx/User_talk_archive"
Community content is available under CC-BY-SA unless otherwise noted.