The Militia was a paramilitary organization within New Marais led by Joseph Bertrand III, acting as the city's de facto police force. A radical organization devoted to "human purity" and the elimination of Conduits, the Militia took over the city after order fell, though they continue their movement against superhuman individuals by apprehending them.

The Militia members were originally Hunters living in the swamps of New Marais with no other purpose in life other than to hunt, get drunk, and assault the public in their free time. Following his organized attacks on the public by the Corrupted. After effectively wiping out the NMPD with the Corrupted, Joseph Bertrand pulled these hunters into an organized force, that he proclaimed were protecting the citizens of New Marais, making them seem like heroes while covertly carrying out his terrorist operations.

They functioned as the city's oppressive de facto police force, but in all reality they were nothing more than predators and criminals who could be seen mugging citizens on the street. Bertrand had them scour the city for anyone deemed a "Deviant" to kill and/or capture them, and attempted to create a public perception that these people had the Devil in them and must be cured. In reality however, these were people that had the Conduit gene, and he was turning them into more Corrupted to eventually sell to complete his plans for a Conduit arms race. At this point, the Militia controlled all corners of New Marais. They maintained large prison complexes and public cages to capture and display Deviants and remnants of the NMPD (who at that point were essentially rebels). They could be seen patrolling the entire city with small squads and large road convoys. Bertrand had Militia banners and paraphernalia placed across the city and used the cities public broadcast system to broadcast Militia propaganda. When Cole arrived in the city, they hunted him as the "Demon of Empire City," and tried to hinder him at every turn. Cole aided the local Rebels to overtake a major Militia stronghold and dismantled countless of their other operations. When Cole accidentally released the Vermaak 88, they lost most of their territory in the Gas Works. This led them to embark on a very costly campaign against the Vermaak, and distracted them from their war with Cole. The final nail in their coffin came when Cole photographed and broadcasted Bertrand turning a Deviant into a Corrupted, exposing the faction for what they truly were. Militia support dwindled while Rebel numbers skyrocketed. Bertrand went into hiding, and when he was trying to secretly leave the city, he was ambushed by Cole, Lucy, Nix, and the Rebels, killing him. The Militia was a shadow of what they once were.

After the death of their leader, the Militia all but vanished from the streets of New Marais, only reappearing when Cole faced the Beast. The remaining Militia members defended St. Ignatius's cathedral and cheered Cole on, as he climbed the cathedral to finish charging the RFI. Many sacrificed their lives to help Cole, but their sacrifice was not in vain, with the Beast dead, and the plague cured, life returned to normal in their city.

In the alternate evil timeline, while Cole works with John White and Lucy Kuo to destroy the RFI, the Militia and Laroche's Rebels, put aside their differences and join forces in an attempt to try and stop the conduits. Unfortunately their efforts were in vain, and when Cole absorbed the Beast's power, he unleashed a blast that, not only killed everyone in New Marais that did not carry the conduit gene, but also destroyed the city.

The Militia had a limited number of troops, but a high number of weapons. Where they lacked in Conduit Troops they made up for it with military grade hardware such as attack Helicopters.

The Militia watching over New Marais.

A Militia member smacks a citizen with his rifle butt. 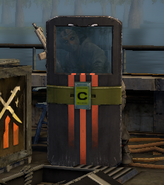 A Militia member using a shield

Cole performing a Bio Leech on a Militia member.

A Militia shotgunner captured by Cole 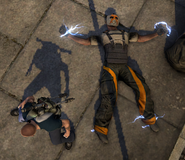