Cole receives a call from Moya, who explains that the Reapers have been contaminating the local water supply, and asks him to investigate Smith Fountain. Cole heads over there, where he finds Trish trying to help the injured. She's not happy to see Cole, but since the fountain is running with Black Tar, she reluctantly puts her trust in him and asks him to stop the flow.

As Cole shuts off the valve, he is sprayed by the tar, seriously impairing his powers and vision. Trish leads him to an ambulance, where she has a solvent to get the tar off. On the way over, Cole begins hallucinating, seeing giant Reapers line the street before him, and hearing the voice of a mysterious woman.

Once Cole reaches Trish, he blacks out, though quickly comes around as Trish sprays his face. He thanks her, but she rebuffs him, telling him that it's the only time she will help him.

“ You won’t be able to shut me out forever. Eventually, a crack will appear and that crack will spread, and grow larger, and then the wall comes down. ”
— The mysterious woman taunts Cole.

Speaking to Moya, Cole learns that there are two more valves nearby. Heading to Memorial Park, he is attacked by a group of Reapers (including two conduits). Once this threat was dealt with, Cole turns the second valve, once again receiving a face full of tar. As he makes his way to the third valve, Cole once again hears the mysterious woman's voice as he tries to fight the effects of the tar. Once he reaches the third valve, Cole admits to himself that, “If I turn that valve, I’ll take another blast of crud to the face” and is faced with a Karmic Moment: be evil and force a nearby citizen to open the valve, or be good and open it himself.

Contacting Moya again, Cole learns that the three valves he has shut off were all fed from a pipe found in the tunnel running under Memorial Park. The Reaper's have blocked the tunnels entrance, but Cole easily makes his way past these obstacles. Unfortunately, his hallucinations return as he makes his way along the tunnel, causing him to hear the mysterious woman again, and to see fake Reapers alongside real gangs of his adversaries. At the end of the tunnel, Cole calls Moya, telling her about the truck attached to the water pipe. She advises Cole to destroy the truck, which he does before leaving the tunnel. 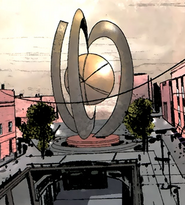 Story missions in Infamous
Retrieved from "https://infamous.fandom.com/wiki/Mind_Games?oldid=102463"
Community content is available under CC-BY-SA unless otherwise noted.