Neon refers to the ability of absorbing, redirecting, and controlling Neon light. This ability is first demonstrated in Infamous: Second Son by Abigail Walker and eventually absorbed by Delsin Rowe.

This power is used primarily for getting a distance between Delsin and his enemies and making precise, powerful attacks. The Neon Beam deals high damage, taking out human sized targets in one or two shots. The beam's travel speed is instantaneous, making it perfect for sniping enemies from a distance. The main drawback of this attack is its low rate of fire.

After absorbing neon, Delsin can use a variety of abilities such as Light Speed with which he can climb buildings as well as briefly dash through the air. At first, Delsin can only dash for a few seconds, but Light Speed can be upgraded to last indefinitely. Light Speed can also be upgraded with Photon Jump which allows Delsin to quickly move from rooftop to rooftop. If Dash Execute is purchased, Delsin can "cannonball" through his enemies to down them instantly.

Neon Thrusters do not provide as much of an altitude boost as other Thrusters do, but Light Speed compensates for this easily.

Delsin also has an ability called Laser Insight. When using this ability, two areas are highlighted on human-sized enemy: the head and the shin. Shooting the head will award Delsin Evil karma and cause enemies to be covered in dark-red neon and be obliterated, while shooting the shin will award him Good karma and subdue the enemy with neon binds. The obliteration has a splash damage effect: if an obliterated enemy explodes close to another enemy, that enemy will be obliterated as well. This ability can be upgraded with Good Karma, allowing it to last longer and adding a time dilation effect.

In addition to his normal Neon Beam, he can throw Stasis Bubbles that launch enemies up into the air in slow motion and negate gravity, so that he can get a clearer shot at their weak points. Good Karma upgrades will allow the Stasis Bubble to hold up enemies for a longer amount of time.

Delsin also has a more powerful "charged shot", called Phosphor Beam, which is strong enough to take down structures, but is limited by the Heavy Ammo counter.

If Delsin is good, his neon will be normal coloration, and if he is evil, it will be pinkish-orange.

This power set also imbues Delsin's Chain with neon and causes it to become rigid which allows him to wield it like a sword, which can be used to the same effect as the smoke whip, except it hits faster and more frantically, and causes the target to be covered in neon gashes. After an enemy is knocked to the ground, Delsin has the ability to execute them using his Neon sword, or subdue them using neon binds. He thrusts downward into their backs, causing them be obliterated, exploding into dark red neon, and earning him Evil Karma.

The Karma Bomb for Neon is the Radiant Sweep. When using this Delsin charges up and sends a shockwave of neon energy, which levitates enemies and destroys vehicles. Delsin then levitates in front of his enemies, before showering them with neon lasers. The lasers then explode, as Delsin jumps to the ground. Depending on Delsin's morality the bolts can either subdue the enemies and leave the civilians alone (Good karma) or obliterate everyone caught in the blast (Evil karma).

Light Speed in the air 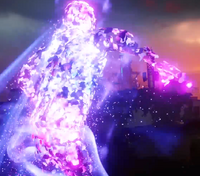 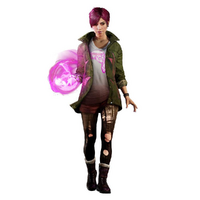 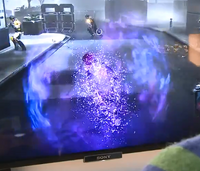 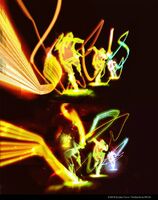