Apart from the hangovers, this place was a goddamn haven.
― Cole MacGrath describing New Marais.

New Marais is a city located in Louisiana. It serves as the main setting of Infamous 2 and is based on New Orleans. It is also much more diverse, populated, and dangerous compared to Empire City in the first game.

Four years before the game's events, Cole MacGrath came to New Marais to practice his parkour, even Zeke having an attempt at it, due to the recent flooding and the police's leniency compared to other cities.

However, the Militia, a group of human purity enthusiasts who wished to eliminate all super-powered humans was formed by Joseph Bertrand III. They gained control of the city and overthrew the New Marais Police Department, acting as the city's de-facto police force. However, they were nothing more than thugs who tormented normal citizens and ruled the city through pro-Militia and anti-Conduit propaganda.

Additionally, Betrand transformed ordinary humans into mutated rabid creatures called Corrupted in his campaign to further turn the public against Conduits, allowing them to run rampant around the city and surrounding swamps to attack Cole and the citizens alike, forming a pseudo-gang of their own.

Later on, Cole encountered Vermaak 88, a South African private military firm who were given cryokinesis by Bertrand's Transfer Device, who Bertrand planned to use to sell to various governments and black market dealers to start conflicts between Humans and Conduits. However, Bertrand and the Militia's deception was eventually exposed, allowing the NMPD to restore order in New Marais once more. As time passed, Cole liberated New Marais from most of the Militia, Vermaak 88, and Corrupted, while absorbing Blast Cores to charge the Ray Field Inhibitor, a device capable of curing the Ray Field Plague and defeated a powerful Conduit known as The Beast.

﻿On the official website several areas and landmarks in-game were revealed.

"The oldest section of New Marais, Ascension Parish is also one of the most dangerous. Once the jewel of the city, Ascension is now overrun with drugs, gangs and crime."

"While many of New Marais’ plantations thrive as modern tourist attractions, it is the ones left abandoned that keep the most secrets"

It is implied by Zeke that the Plantations are being used as the main base of the Militia.

"An unstable foundation means this historic church is always in need of repair. The city's most crucial main utility lines run through the property, complicating construction efforts for decades."

"With its sidewalk cafes and renovated condos, this is where New Marais' middle and upper-classes live and play. Ville Cochon is also famous for its red light district. As one of the major ports in North America, it's enjoyed an insatiable demand for adult entertainment as sailors, traders, migrants, and others constantly flowed through the city."

"The city's oldest and largest cemetery, St. Charles was expanded after the Civil War and the cholera outbreak of the mid 1800s. Today, there are many stories buried beneath its grounds."

In the game, several Swamp Monsters can be found there along with several Militia and a chopper.

The area where the Corrupted first emerged, a small community built on swampland, now home to an outpost built by the Militia to make sure no more monsters come out of the swamp. Also the home of Nix before the Militia took over and killed everyone, possibly hunting for her.

The Bayou is the lower-class district of New Marais, where more of the poorer citizens lived. The swamp is located on the northwestern corner of New Marais, near Flood Town. There are quite a few civilians living in the area. Many explosives can be found in the area, which would serve a benefit for fighting the Militia. There is a trophy the player can earn for returning to this area, named "Back to the Bayou." There is also a Dead Drop located in the slums where the inhabitants lived.

The Bayou was the first area Cole MacGrath had to navigate through during his entry into New Marais. The Militia used to have a blockade in the area until Cole pushed them out of there, though it improved very little of the citizen's way of living. It is located out in the shores of the swamps in New Marais, and despite being sparsely populated, it's a place where the prostitutes and drug users of New Marais live.

As Cole made his way through the swamp, he spotted a large generator that would activate the bridge leading into the swamp. Cole was presented with a karmic moment, in which he could charge it until the bridge lowers, or continue to charge it, causing an explosion that would kill all of the Militia and the civilians. As he continued through the swamp, he fought more Militia and took out all of their equipment by blowing up the gas tanks.

A specific part of the area has special significance to the story, as it was the home of Nix and her family before Joseph Bertrand detonated the Ray Sphere. The explosion killed all of Bertrand's prisoners, which were composed of low-class citizens that lived in the city (people Bertrand thought would go unmissed), and granted Nix and Bertrand their respective powers. Nix later led Cole to the site of The Blast and explained the whole story to him.[1]

This area is where the player views the first broadcast of Bertrand's propaganda. 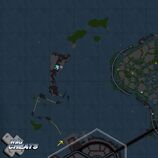 All 5 districts of New Marais

In an IGN article the developers responded to some questions. One of the questions was about Cole's effect on the city. "IGN AU: How persistent is that destruction?

Joe Ishikura: We actually have two answers for that, because a lot of stuff in the main storyline; we wanted to make sure that the choices really mattered, so we actually have persistent changes in the environment, but for the most part, for things like verandas, or that warehouse that you can knock down, we actually had an internal debate for a little while – do we [make this persistent]? I guess it's more real, but at the end of the day the thing that we kept coming back to is – which one's more fun? And I think it's actually just way more fun if, after you leave for a little bit and you come back, you get to knock down that warehouse again and again and again. It's so much fun to do!

Ken Schramm: To summarize that whole viewpoint on persistent versus not, here's how it breaks down. If it's a choice of yours and a Karmic choice - for example, [in one of the trailers] you've seen the trolley running into that building, when Nix tells you to do that – that building will be permanently scarred throughout the game. However, if it wasn't a Karmic choice - you've seen the Behemoth coming down the street and it's breaking all that stuff; that's not your choice, and that will eventually be rebuilt. That's the differentiation. "

This is not actually particularly accurate, since some storyline destruction unrelated to Karmic choices, like The Beast destroying the dockyard cranes in Flood Town, is never repaired.