Orbital Drop is an ability used by Delsin Rowe in InFamous: Second Son. It allows him to soar to an orbit-like height, and then crash into the ground which causes a massive explosion which genuinely destroys cars, and D.U.P buildings nearby. It is Delsin's Smoke Karma Bomb.

When Delsin uses the Orbital Drop, he first starts to give off large swirly plumes of smoke around his arms and lower body. He then launches into the sky, looks up and transforms into three balls of smoke and ash that swirl into the sky. Once they reach a high enough altitude, they collide, causing the ashes to re-materialize back into Delsin as he then back-flips in the air whilst smirking and heads back down to Earth, using his Smoke Thrusters to accelerate his descent.

As Delsin descends, players can control where they want Delsin to land in order to cause the most damage possible. When Delsin hits the ground, the impact produces a massive explosion and reduces Delsin to ash. The ashes from the explosion come together in a tornado-like fashion, causing Delsin to re-materialize once again. The Evil karma version of this move disintegrates any hapless victims into ash in the wake of the explosion. The Orbital Drop must be done outside or else the enclosure will cancel out the attack. 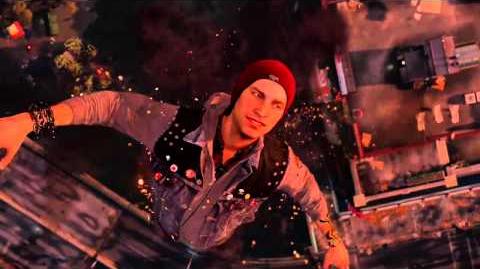