Past Decisions is a neutral side mission in Infamous 2, which changes in relation to Cole's karma choices in Infamous.

Cole heads to a back alley in New Marais and meets with a young woman. What happens next depends on his decisions in Empire City.

“My mother was in Empire City. She would have starved to death without your help.”
— The Woman's dialogue when Cole is on the Good Karma side.

If Cole destroyed the Ray Sphere in Empire City, the woman will thank him and kiss him, then walk away as the mission ends, with Zeke calling Cole saying he shared some of his food and deserves a kiss too.

“My mother starved to death in Empire City because of you! I'll kill you!”
— The Evil Karma variant.

If Cole activated the Ray Sphere in Empire City, the woman will hate him, blaming his selfishness for the death of her mother. She immediately becomes hostile as control is returned to the player, and attacks along with a squad of Militia, seemingly being part of a plan to ambush Cole. When the Militia attack, they light fires at both ends of the alleyway, preventing Cole from escaping. When all enemies are defeated, the exits will go back to normal and the mission is complete. It is optional to kill the woman. 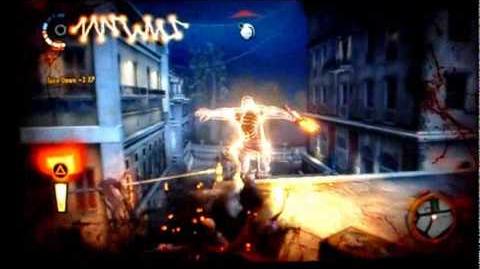 Side missions in Infamous 2
Retrieved from "https://infamous.fandom.com/wiki/Past_Decisions?oldid=106737"
Community content is available under CC-BY-SA unless otherwise noted.