"Photo Finish" is a side mission in Infamous 2.

Zeke contacts Cole requesting his photographic skills again. He's heard about an explosion at the Plague Ward and wants some photos to see if it's the Beast‘s handwork. Once Cole has taken the picture, Zeke observes that the blast zone seems familiar, but then asks Cole for a picture of the Ice Tower exclaiming “that thing's crazy.” Once Cole has took a picture of it, the Ice Soldiers send an Ice Titan after him. Zeke, sensing an opportunity, asks Cole to “get some shots of his powers” Cole manages to take pictures of the Titan firing an ice beam, regenerating a lost arm and throwing ice balls in his direction before defeating him.

Photo of the Plague Ward

Photo of the Ice Tower

Photo of an Ice Titan

Cole defeating the Ice Titian
Add a photo to this gallery 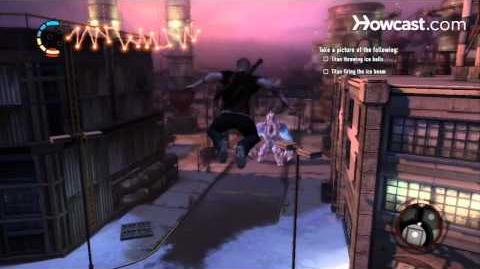 Side missions in Infamous 2
Retrieved from "https://infamous.fandom.com/wiki/Photo_Finish?oldid=105744"
Community content is available under CC-BY-SA unless otherwise noted.