The Empire City Police Department and New Marais Police are recurring factions that have helped or hindered Conduit Cole MacGrath in his exploits, depending on his Karma. The Seattle Police Department shares a similar relationship with Conduit Delsin Rowe.

Scattered all around the City, the Empire City Police mostly disappeared, many were in hiding or dead due to either the blast or the gangs that took over the city. They were found in missions triggered by Warden Harms as well as patrolling the streets. Cole could find out-numbered uniformed officers in shootouts all over the city; he also encountered more policemen patrolling the Empire City streets if he chose to protect the police stations.

The various gangs of Empire City constantly tried to eliminate the remaining police, evident with many shootouts that occurred, some in missions, some outside of them. They were in a constant state of war with the Reapers, Dust Men, and First Sons, and with Cole's help, by the end of the game, they mostly retook the city.

The Police provided security for some buildings, like the Hospital, most operated police stations, parks, and the Prison. Also, regardless of his Karma, the officers of the Warren fought alongside Cole during the mission Alden in Chains. The police set up a temporary command area outside of the prison, as the Warden was the commander of the remnants of the ECP and a very large force is present for the Prison battle against the Dust Men.

In the DC comics storyline, Cole's relationship with the police seems to have improved, to the point that when Moya captures Cole, Warden Harms and the police assisted Zeke in a rescue effort to save Cole. The Police also assisted Cole in taking down Moya's men and fight alongside him as he faces David Warner.

It is likely that, as with most of Empire City, the EPD was completely destroyed by the Blast created by the Beast. It is unknown whether or not any of the members of the force were able to make it onto the single escaping evacuation boat. The fate of Warden Harms is also unclear, but it may have been possible that he was given first access to the evacuation ship given his important status.

The standard policeman wore a normal policeman uniform, with various variants. Some wore bullet-proof vests, and some wear bandages and other headwear. Their utility belts consisted of the standard police equipment: handcuffs, pepper spray, a holster for their pistol, and a radio (although it's likely not functional due to the fact that their radio tower was destroyed). They used pistols based on the real-life pistol, Glock 7. The S.W.A.T. team members wore the standard S.W.A.T. equipment: riot helmets, full-body riot armors, and radios attached to their shoulders. The S.W.A.T. team used rifles based on the real-life assault rifle, M16A1.

The New Marais Police Department, or simply NMPD, is a faction in New Marais. They are either an ally of Cole, or an enemy - depending on his choices.

The NMPD is in a similar position as the Empire City Police Department in Empire City. The NMPD was protecting New Marais from the Corrupted, but they were quickly overrun and the Militia stepped in to fight the Corrupted. After the Militia caged up a majority of the cops, it seemed from then on three police officers patrolled the streets of New Marais.

After Cole arrives and takes out most of the Militia, more and more law enforcement begins patrolling the streets, aiding the people of New Marais and the Rebels to the point that the police are seen patrolling New Marais more than the Militia.

The New Marais policemen wear their standard uniform and have the same standard equipment that the ECPD had on their utility belts. They use pistols based on the Desert Eagle, and also managed to gather RPGs for some officers, most likely taken from the Militia. They also occasionally use grenades. 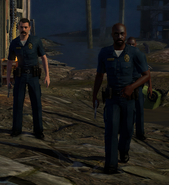 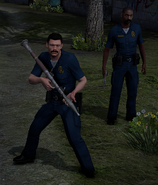 A NMPD police officer with an RPG

The Seattle Police Department, or SPD, is a faction in Seattle. Due to Conduits being relabeled by the DUP as Bioterrorists, the police are hostile towards Delsin and will open fire on him with their weapons. However, Delsin can earn their trust by gaining good Karma and he earns negative karma for attacking police officers, presumably because unlike the DUP they are not aware of the conspiracy. They play very little part in both Second Son and First Light.

In First Light, they play a minor antagonist to Abigail, as she had to ally with the Thugs to wage a war against the cops to save her brother. Shane was able to secure unhindered movement of his drugs throughout Seattle from the police chief so in return Abigail would stop killing his officers. This is likely why the Thugs operate out in the open, fully armed, with little police intervention by the time the events of Second Son happen.

In Second Son, they play virtually no role, other than that they can be seen investigating Abigail's murders, and they are either allies or enemies of Delsin, depending on his karma. Reggie uses his connections with the police force to occasionally provide intel for Delsin.

Their equipment is identical to the NMPD's.