“Those rednecks are taking people off the street and marching them away. The ones they take nobody ever sees again. You have to find them and stop them.”
— A concerned citizen tells Cole what's happening.

"Police Parade" is a Good karma side mission in Infamous 2.

The mission starts as Cole speaks with an unnamed citizen, who tells him that the Militia are taking prisoners and, after parading them through the streets, nobody will ever see them again.

Cole has to save the prisoners the woman mentioned, fighting the Militia while keeping the imprisoned people alive. After the last Militia troop is downed, Kuo calls Cole and compliments him on his good deed, ending the mission.

This mission is just like any other abduction you encounter around the city. Simply just focus your shots on the Militia, and don't let any of the hostages get hurt. Using Precision or the Magnum Bolt can be very effective in this mission.

Upon completion, Cole receives 100 XP and slightly reduces enemy activity in New Marais. Also, he becomes a bit more heroic. Completing this mission locks out the evil side mission "The Hunt." 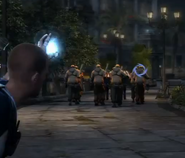 The Militia escorting the prisoners

Fighting the Militia
Add a photo to this gallery 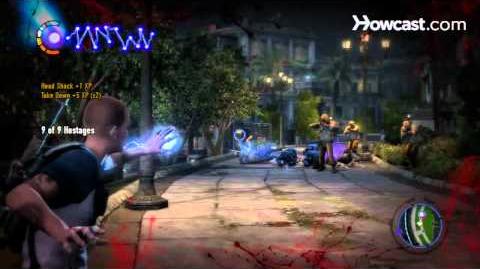 Side missions in Infamous 2
Retrieved from "https://infamous.fandom.com/wiki/Police_Parade?oldid=110080"
Community content is available under CC-BY-SA unless otherwise noted.