The Power Meter is a main gameplay element in Infamous: Second Son. It shows the current power Delsin Rowe is using and how much is remaining. It is the successor to the Battery core from inFAMOUS 1 and 2.

The Power Meter changes color depending on what power the player is currently using (brown for Smoke, gray for Concrete, purple for Neon, and blue for Video). It also shows rocket icons which indicate the heavy power. The amount of heavy powers the Power Meter can hold can be upgraded for maximum devastation. When the meter is out and the player tries to fire their power the controller will just vibrate. To refill the meter, Delsin must absorb a source of that power, such as a neon sign for neon. 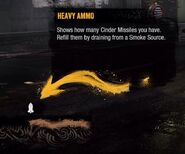 The game telling the player about heavy powers (ammo).
Add a photo to this gallery
Retrieved from "https://infamous.fandom.com/wiki/Power_Meter?oldid=105844"
Community content is available under CC-BY-SA unless otherwise noted.