Power in Ascension Parish
Side Missions

"Powering Up Ascension Parish" is the 13th story mission in Infamous 2.

Hey man. You went college prep, I took shop classes. So uh, who's the dummy now?
― Zeke, regarding his engineering knowledge.

Having rescued Kuo from the Militia, Cole decides to restore the power inAscension Parish. Arriving just outside the powered down area, he finds a transformer. He receives a call from Zeke, who informs him that the Militia has isolated the transformer away from the other ones.

Grabbing the metal cage that surrounds the transformer, Cole fires a Tesla Missile, guiding it through the air to create a connection to the first transformer in Ascension Parish. As he enters the powered down area to protect the transformer, Zeke warns him that the Militia will try to shut it down. Once Cole reaches the transformer, he (briefly) has an unlimited electric source and uses it to his advantage whilst fending off Militia members.

Once the transformer is fully charged, Cole fires another Tesla Missile to the next transformer and makes his way to that location. While running over there, Zeke gives Cole an update on Kuo's condition and mentions it reminds him of when he and Trish took care of Cole after the Blast in Empire City, but Cole ends the conversation saying that Trish saving him got her killed.[1]

Just like last time, Cole begins guarding the transformer, taking in unlimited energy from the generator while fighting the Militia. As soon as it is fully charged, Cole fires one last Tesla Missile to the third and final generator.

Cole then contacts Zeke asking if its possible Kuo has gained superpowers of her own, much like how he got powers after the Blast. The latter states that she probably did gain powers, and apologizes for mentioning Trish out of the blue. Cole says it fine and that he lives with his mistakes.

After defending the final transformer in Ascension Parish, the power is fully restored to the whole district.

Turning on the transformer 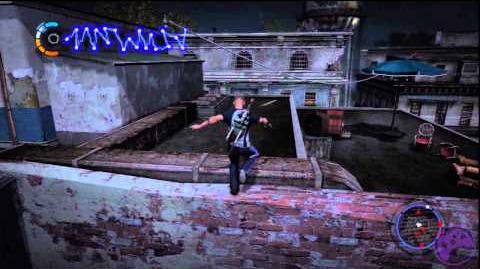 Story missions in Infamous 2
Retrieved from "https://infamous.fandom.com/wiki/Powering_Up_Ascension_Parish?oldid=105710"
Community content is available under CC-BY-SA unless otherwise noted.