Proud Warrior is a side mission found in the Gas Works District in Infamous 2, in which Cole helps Zeke hack the New Marais TV network a second time.

“Time for another episode of Zeke TV. You, my friend, will be my very special guest”
— Zeke, to his best friend.

Cole receives a call from Zeke who explains that he wants to jack into the local T.V network again, and ask his friend to drain the energy from five satellite dishes in the Gas Works. Once Cole has located the dishes and drained them, Zeke tell him to get to a TV so he can see "the show". Turns out Zeke's "show" is a lonely hearts commercial, telling the women of New Marais that Cole is "A puppy dog on the inside" stating that "He loves all the standard crap, long walks on the beach, brushing ladies hair, romantic picnics with cheese" Zeke finishes his commercial by asking "If you think you’ve got what it takes to tame the heart of this proud warrior, give him a call" and publishes Cole's cell phone number on the screen. When the advert finishes Cole shakes his head and jokingly calls Zeke a "bastard" for setting him up.

Cole on his way to another dish

Cole watches Zeke's show
Add a photo to this gallery 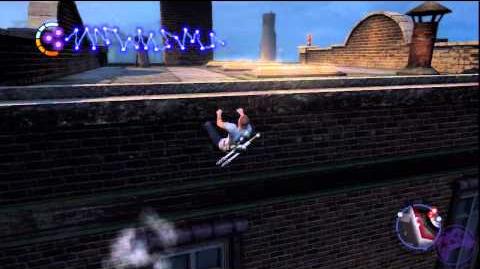 Side missions in Infamous 2
Retrieved from "https://infamous.fandom.com/wiki/Proud_Warrior?oldid=105740"
Community content is available under CC-BY-SA unless otherwise noted.