Ray Field Energy is the 24th story mission in Infamous 2.

After Cole helped Laroche put out the burning wells around Flood Town, Laroche gave Cole the blast core he had promised him. Cole makes his way to Zeke's Flood Town trailer and meets up with Zeke and Kuo. Zeke first mistakes Cole for an enemy and aims a gun at him, but quickly aims it down after realizing it's Cole.

The Aim of The RFI

Kuo reveals that after looking through Dr. Wolfe's journals, she discovered that Wolfe originally created the RFI in order to cure the Plague; as Ray Field poisoning is caused by Ray Field radiation, and the RFI wipes out the radiation. The group goes into joy and Zeke hand Cole the blast core Laroche gave him. However, after thinking it through, Cole realizes that Ray Field radiation is caused by a Ray Sphere blast; thus meaning him gaining powers was the cause of the Plague that killed thousands of people.

Zeke reassures Cole that they will cure the Plague. Cole activates the blast core and falls down into comatose. Kuo who has never seen Cole activate a blast core before worries, until Zeke explains this is normal.

Cole later wakes up, commenting that he doesn't feel good after Zeke asks him. Cole goes on to try to activate the RFI, but to no avail. Zeke then tells him to go out and see what power he has unlocked now.

Cole heads out and fires an electromagnetic rocket. Cole comments in excitement how this will be useful. Soon, Cole gets a call from Kuo telling him that Nix has arrived and asks him to get back to the trailer.

"I caused the Plague" 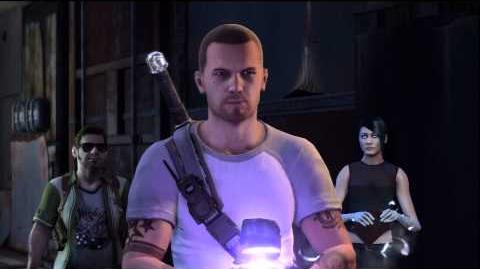 Story missions in Infamous 2
Retrieved from "https://infamous.fandom.com/wiki/Ray_Field_Energy_(Mission)?oldid=105797"
Community content is available under CC-BY-SA unless otherwise noted.